Ugly duckling turned swan, Jassi aka Mona Singh will kick start a new reality show on Bindaas called Blue Carpet. This weekly series will witness ordinary young girls going through make-overs. Mona will be the first and only celeb contestant to undergo a transformation albeit a mild one. 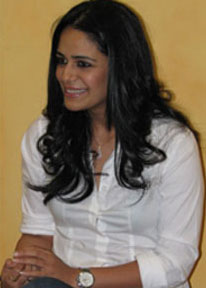 Talking about the experience, she says "It is unique as she has never undergone a make over in real life i.e. changing her hair style and wardrobe. I have never had my hair colored under a panel of experts. My character had experienced the same in Jassi though.  She also finds no comparison with her other show Extreme Makeover for there, you had victims with serious injuries getting a new lease of life".

Mona also had lot of fun shooting for this coming Friday's Jhalak Wild card episode. "I took everybody's case royally. I wanted to anchor this season as well, but date issues prevented the same". She did not want to comment on Shiv Pandit's ouster as anchor. "If the channel has decided about the same, they must have had a valid reason. Rohit Roy is a great anchor, and he also has more years of TV experience behind him", states she.

She believes that Ram Kapoor has a good chance to return in the Wild card as he has a strong vote bank. "Agreed he is more entertainment than dance, but this show needs some fun, not all should be as serious as Gauhar. Plus this show is not about real dancers but about people who are learning to dance", states the actress. Asked to comment on the difference between all the three seasons, she quips "During our time there was more ball room dancing but now it's more Bollywood.  Also this time things are tougher due to the Face off. I would have shuddered to take part in the same as I still maintain that I am not a good dancer", says the winner of Jhalak Season 1.

Mona is also quite busy with the shooting of her upcoming film, 3 Idiots. "We have finished three schedules and will soon leave for the next. It's quite chilled out compared to TV as nobody is in a hurry to dispatch tapes", she adds.

As for television, she will soon do one more reality show for a major channel.

Rohit Roy & Manasi Joshi Roy are back with their Second Short Film; ...

Rohit Bose Roy Reveals that Wife Manasi was the first girl he spoke to ...

zhasan2 11 years ago all the best!! :) she seems like a reasonable and nice person ;) totally agree w/ the gauhar comment

NKSUDHIR 11 years ago All the best, Mona. You will rock as an anchor becasue you rock in every thing you do. Keep up the good work.

fm05 11 years ago Thanks. I love the genuine nature of Mona Singh, she doesn''t just utter cliched responses. She says her opinion in an unassuming way, such that it is not offensive. Like, say Gauhar''s seriousness for the competition needs to be balanced out by Ram Kapoor''s comic edge, who can bring some fun back into show. I hope he comes back too as i miss his jokes with Karan.

naadanmasakalli 11 years ago missing u mona. ah how i want to see another season of jassi with mona and apu

dua_44ever 11 years ago Agreed he is more entertainment than dance, but this show needs some fun, not all should be as serious as Gauhar. Plus this show is not about real dancers but about people who are learning to dance, states the actress

Puja Banerjee on Having a Traditional Wedding After Baby's ...
31 minutes ago

"Never Felt Anything After Contracting COVID-19" Says Brian ...
54 minutes ago