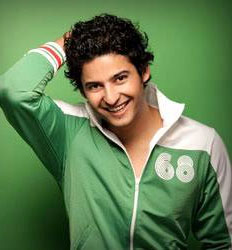 Featured Video
We had also reported that Manav Vij and Rudrakshini, who was earlier seen in Jassuben Jayantilal Joshi Ki Joint Family will be seen playing a couple in the show.

And now, we are giving our readers exclusive news on the leads to be seen in Mitwa.

Mohit Malhotra, a Delhi based model who became quite famous for his nice games in this season's Splitsvilla on MTV will be making his debut as male lead in the show.

According to our source, "Mohit will play the male lead while the female lead cast opposite him is a new face, Tanvi. He will be playing a village boy who is not educated but mature enough to understand what is right and what is wrong".

We tried calling Mohit, but he was unavailable to comment.

As reported earlier, the story has a moral connect, and will focus on various issues like caste discrimination, male child getting prominence in society when compared to the girl child etc. The story line will revolve round the orthodox practices that are prevalent even today in the UP.

The entry of the leads will happen only after the show takes its first leap, wherein the lead girl happens to be the only girl born in the family of Mam Chand, essayed by Shahbaaz Khan.

The promos of the show are on air, but the launch date and time slot has not been finalized. However, it is expected to be in the afternoon band.

Watch this space for more on this show..

+ 5
13 years ago Nope This concept is quite different

its on inter-caste marriage basically,
very different from inter-religious marriages which was portrayed in a Colors channel show Jeevansaathi

13 years ago it looks similar to naa aana is des lado....happy to c mohit.....but i dont think hez actor material....

+ 2
13 years ago soni_kuri - i agree with u. mohit did the most cheapest things. i dont think he respects girls neither can he be loyal to a girl in his entire life. i dont understand if thats the reason people want to see him. i will he will be kicked out soon

13 years ago After seeing Mohits personality on Splitsvilla it''s going to be a joke seeing him so fake as a hero!

13 years ago Hmm...
he''s nice though a bit but better in the splitsvilla mood!