Mitika Sharma, who debuted in Ekta Kapoor’s Kavyanjali and later was seen in Khwaish, plays a negative character in STAR Plus’ Santaan. It has been recently heard that the actress is keen on working with her debut camp, Balaji Telefilms, once again. Telly Buzz gives you more details. 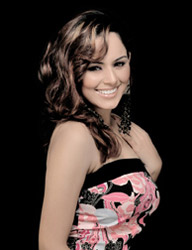 Featured Video
Mitika essays the role of Anusha Lamba Dixit in Santaan and is always scheming to keep her husband away from his parents. When asked why she is so keen on working with Balaji once again, Mitika replies, “I have worked with Balaji in the past and I had a great rapport with them and would like to work with them again.” So what kind of role is Mitika looking for? She says, “The role depends on the character sketch. I don’t mind if it’s a negative or positive role. I don’t even mind if it is a role in a mythology or the regular saas bahu dramas, as long as the role is good and helps me grow as an actor.”

So if given a chance, would Mitika do a reality show? Mitika quips, “Definitely, I would love to participate in a reality show. In fact, I have received some offers but I am not at liberty to divulge any of the details right now.”

Hmmm… we wonder if Ekta Kapoor is listening???

14 years ago She looks really pretty in those pictures. In the drama she does not look like this.

+ 5
14 years ago I watched Kkavyanjali but I cnt remember which character she played... I only remember Kkavya, Anjali, Yug, Shrauya, Nitya Nanda, Bauji, Shlok... cnt remember her?

i like her work in santaan...shes so funny as a villain...loll her facial expressions make me laff...shes entertaining...