‘Mithya’, directed by Rajat Kapoor and produced by Arindam Choudhary, is the story of V. K. or Vinod Kumar Agarwal who wants to become a hero in Bollywood, but fate has other designs for him. In his endeavor to make it big in tinsel town, V.K. (Ranvir Shourie) lands in the underworld and is drawn into a trap by the Mafioso. And the reason behind it is also strange. Vinod is the lookalike of Mumbai don Raje Bhai alias Rajendra Sahay (again 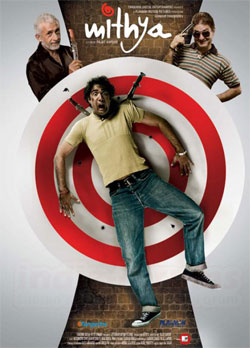 Now in order to reign over the underworld, other dons played by Naseeruddin Shah and Shetty (Saurabh Shukla) kill Raje Bhai and put V.K. in place. And even Raje Bhai’s wife (Iravati Devi), younger brother (Harsh Chhaya), mother, two kids and members of his gang fail to comprehend the change and think V.K. is Raje Bhai.

Meanwhile, Naseeruddin’s moll Sonam (played by Neha Dhupia) comes close to V.K. Sonam, who also landed in Mumbai with the dream to be a heroine in Bollywood, is always protective about V.K and always tries to shelter him. However, Sonam hangs on with Naseeruddin as his moll with the hope that some day the don would make a film with her or at least finance her film.

The don (Naseeruddin) and Shetty are delighted when they replace Raje Bhai with V.K., but their happiness is short-lived as Vinod loses his memory in an accident. The story takes an amazing twist when V.K. forgets his identity and begins to believe that he is Raje Bhai. He even forgets Sonam, but the moll is still in love with him. The story meanders again when V.K.’s original identity is revealed to Raje Bhai’s family members and his gangsters who come to know that V.K.’s is a struggling actor.

In the end, Raje Bhai’s brother kills V.K. hoping to bring Raje Bhai’s dead body and the truth before his family and the society. Tragically, Sonam too ends her life in her quest for love. In this manner, V.K. ends his ‘Mithya’ (false) identity and bids adieu to the ‘Mithya’ (artificial) society.

As far as filmmaking is concerned, ‘Mithya’ is of a different league from most of the Bollywood movies based on the underworld and mafias thus far. It is a commendable effort to blend comedy and thriller and the credit for this goes to Rajat Kapoor and Saurabh Shukla – the two screenplay writers of the movie. Rajat has also done a splendid job as the director and the audience may expect good films from him in future.

Although loud in parts, Ranvir Shourie has portrayed the most complex character in his acting career so far. Particularly, he has been remarkable while portraying the role of a struggling actor. Neha Dhupia too has been able to attract the audience attention without shedding clothes this time. And as Mannu, Harsh Chhaya has once again proved that he is a good actor, and so has Iravati Harshe as Raje Bhai’s wife.

Sourabh Desai has scored the music for ‘Mithya’, while Remo was in-charge of the choreography.