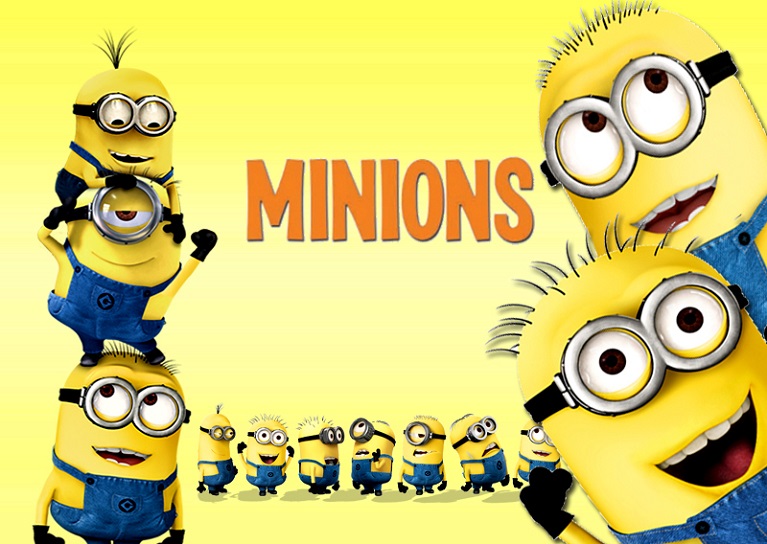 For the uninitiated, they are those "tiny, yellow-pill shaped, jabbering creatures", who first made their appearance as the innocuously helpful henchmen to the dastardly, yet well meaning villain Gru (voiced by Steve Carell) in the "Despicable Me" franchise, which was released in 2010 and 2013 respectively.

This film is the prequel to "Despicable Me". It is dedicated solely to the Minions, they literally take centrestage. The plot reveals their journey, right from prehistoric times, till how they find Gru.

With the song whose lyrics are, "So happy to be together" as the backdrop, the narration rolls off with a voiceover of Geoffrey Rush explaining the Minions' tortured history and their affinity to serve wicked masters. This includes the dinosaurs and pre-historic man. Then over a period of time, the narration continues to tell us about how the Minions served the Egyptians, Dracula and other historic characters. And after an unfortunate incident with Napoleon, they are banished to Antarctica where they lead an uneventful life for centuries.

Now without a master, the Minions fall into a deep depression. Finally, sometime around 1968, Kevin, their leader decides to go in search of a new evil boss. So he sets out on a journey taking along with him, the "not strong enough" childlike Bob and the one-eyed, guitar strumming Stuart, "who is not too sure why he was chosen".

And while they head to Orlando, their journey is eventful. They are helped by a bad family headed by Walter (Michael Keaton) and Madge Nelson (Allison Janney), who are heading to the Villain Convention in New York City.

At the convention, Scarlet Overkill (Sandra Bullock), the first ever woman villain and the equally roguish Herb (Jon Hamm) are looking out for henchmen to be a part of their team. To qualify, the henchmen are subjected to a challenge.

Our trio Minions, Kevin, Bob and Stuart accept the challenge and are soon initiated into Scarlet's group to execute her plan of stealing Queen Elizabeth's crown. This forms the major part of the narrative.

Packed with ample period and fantasy gags strewn at regular intervals, the script by Brian Lynch is fast paced and energetic, there is never a dull moment. Every sequence is well thought of and appropriately slotted.

The voices of the star cast are equally vigorous and dynamic. They bring every character to life and the dialogues in English and gibberish Spanish add to the humour quotient.

On the visual front, the locales are photo-realistic and the animations along with the 3D effects are appealing.

The soundtrack, filled with songs of the 1960s, includes several Beatles works and those of The Rolling Stones, The Turtles, The Doors and Donovan's - Mellow Yellow, which mesh well with the narrative. They enhance the viewing experience.

Overall, directors Pierre Coffin and Kyle Balda, have ensured that Minions have all the elements and star power to be a great family entertainer.