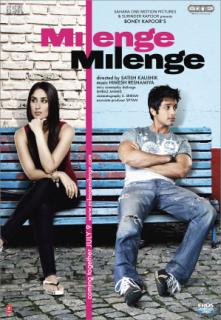 After the long wait of 6 years, Milenge Milenge is finally to hit the cinema halls near you. With inadvertent delays in the coming of this film to town, we also just barely make it in time to pass on this music review to our readers! Composed by Himesh Reshamiya, the music relies on old fashioned tricks from the book, both in its composition and scores, excluding a couple or so soundtracks.

The album opens with the title song Milenge Milenge, sung by Himesh Reshammiya and Shreya Goshal. The initial composition of the song reminds one very much of Dur Na Jana from the film Humraaz, both songs wherein claim Himesh as the common factor. The singers have executed well, especially Shreya Goshal. Her voice seems to be perfect for the track. The lyrics are decent, albeit having nothing new to offer. Overall, a passable song with passable composition.

This song has an alter version which is sung by Alka Yagnik and Jayesh Gandhi. This revisitation is way better than the original track. Alka Yagnik does not fail to impress us with her reliable melody. Jayesh Gandhi matches her well.

Next soundtrack Kuch Toh Baaki Hai is a slow paced song, sung by composer Himesh himself. The song starts well with his signature (read nasal) style but like always, the composition has a heard before air about it. The song is neither bad nor brilliant. The lyrics seem to be dull.

The track has two more versions including a club mix and a remix. The club mix is expectantly paced and better in comparison to the original version. It holds your attention while it lasts. Unfortunately, same can't be said about the remix version. It seems very tedious and the background score is tiring reminiscent of Himesh's older work.

The next song in the queue is the generally awaited Tum Chain Ho. This beautiful melody has been sung by Sonu Nigam, Alka Yagnik and Suzzanne D'Mello. The soundtrack strikes a mix between English lyrics to start off, following on with Hindi. The lyrics for this song are undeniably its USP factor. Sonu Nigam steals the limelight of the song. His soulful voice manages to leave a great impact. Alka Yagnik is brilliant in her parts. Suzzanne's voice has a clear lingering echo to it.

Following suit with the previous songs of the album, this one too has another version - the unplugged - which by the way is simply amazing. With all of but a guitar strumming in the background, this romantic song takes you places and times inside your head. Sonu's voice is perfect to the situation of the song. Himesh's composition finally manages to strike the right chord!

Up next is Ishq Ki Galli, which reminds the listener of older days and music. This melody is sung by Rahat Fateh Ali Khan and Jayesh Gandhi in the background. No doubt Rahat ji delivers his part well but the song overall is somewhat out of place for the current chartbuster trends. However, some people may credit at least the lyrics. Sameer has managed to salvage some saving grace with his writing.

The song has a remixed version, which simply fails to impress.

And finally we have, Alka Yagnik's solo Hare Kach ki Chuddiyan. Ordinary song with ordinary lyrics. Once again, Himesh's composition sounds only routine and oft repeated, not to mention obsolete.

Overall, Milenge Milenge is an album of exhausted resources which have been overused and fail to deliver their old time glory.