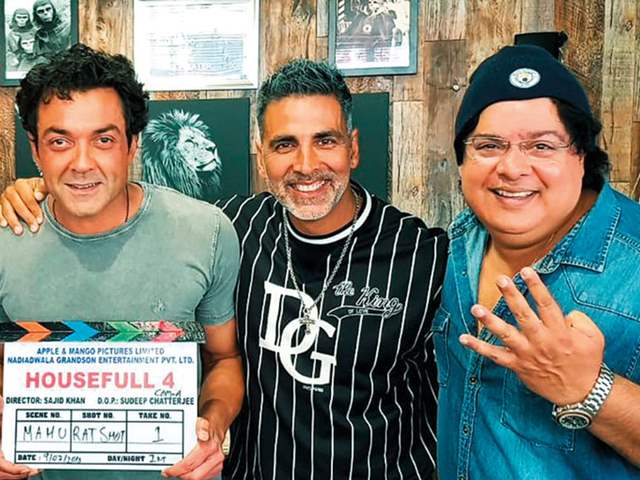 After delivering a massive hit with Mission Mangal, Akshay Kumar is gearing up for his next, the fourth installment of the hit comedy franchise, titled Housefull 4. Directed by Farhad Samji, and produced by Sajid Nadiadwala under Nadiadwala Grandson Entertainment, the film stars an ensemble cast of Akshay Kumar, Riteish Deshmukh, Bobby Deol, Kriti Sanon, Pooja Hegde, and Kriti Kharbanda. Besides, Chunky Panday and Johnny Lever just add the ultimate touch of perfection to the film. Housefull 4 revolves around a unique concept of reincarnation, despite being a comedy-drama, making it one of its kind.

However, the film may face legal trouble as filmmaker Sajid Khan plans to sue the makers and producers of Housefull 4, for allegedly not giving him the due credit for the film.

For the uninitiated, Housefull 4 was supposed to be directed by Sajid Khan, who had also directed the first two installments but was replaced by Farhad Samji due to Me Too allegations. In fact, Sajid helmed almost 70 percent of the film, but has not been accorded with any credits and labeled only Farhad’s name as the director.

This has left Sajid Khan miffed, and reportedly has sent a legal notice to the makers. As per a report in Bollywood Bubble, a close source told the portal, “Sajid Khan is extremely miffed with everyone involved for the way things have turned out to be. He is not happy that he has got no credit for the film, which he has conceptualized and planned and even directed most of. He has sent a legal notice to Fox and asked them to give him due credit.”

Earlier, during the trailer launch event of Housefull 4, when asked whether Akshay would work with Sajid again, the superstar had stated that “If he is acquitted, then I will surely work with him.”

Talking about the film, the comedy-drama is themed around the lives of three pairs of reincarnated lovers, who reunite in the present day. It is slated to release on 26 October 2019.