Mazher Sayedd who had earlier expressed his desire of moving on if Zee's Saat Phere takes yet another leap has now had a change of decision, and is very much part of the show post leap. We 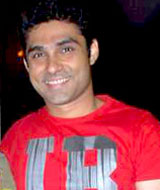 Featured Video
wondered what made him change his mind and hence talked to him.

"The channel requested me to stay back. Another reason is that this is my second longest running show after Kahhin Kisi Roz, so I agreed to continue", explains Mazher.

The actor has been essaying the role of Saloni's brother, Samar in the show. Now that the show has taken a leap, we can see him in an old avatar. "I feel it is challenging to play a 50 year old man. This is not new to me, as I have seen such leaps happening in my earlier shows Kahhin Kisi Roz and Kahaani Ghar Ghar Ki. As an actor, we should be open for such alterations to the character", says the actor.

Mazher is happy and will stay till the end of the show. "I don't have to give many days on the sets. It's just about 10 to 12 days, so that gives me time to look for new ventures too", he concludes.

Let's now see whether the post leap story is impressive enough to keep the viewers glued!!

+ 2
13 years ago thanxx! liked mazher in nb4 with mauli they make a cute pair! all the best for this show!