View Profile
Mayank Anand, who is known for his role of the lovable Dr. Rahul in Dill Mill Gayye, has his hands full these days, and literally.

His debut novel 'Love from the Sidelines', which is being published by Leadstart Publishing, is about to hit the stores and right after all the hard work put into it he found himself posing for Sameer Puri's [photographer] camera! Speaking of the photo shoot, the actor said, "The shoot was super fun. Sameer, my photographer has so many ideas. The different props that were used, like the type writer and the iron, and me on a pile of books, made the shoot so much more enjoyable for me" said an elated Mayank.

It looks as if the creative genius found Sameer's ingenuity on the same wavelength as his. "The shots are really pieces of genius with the props used so creatively and yet making the viewer ponder over the whole scenario. We essentially worked on thoughts and concepts that would bring out the actor, artist and writer in me" he added.

The best of the shoot is left for us to see as the actor generously shares the pictures that were shot in the midst of the shoot.

Looks like he had a blast behind the screen! 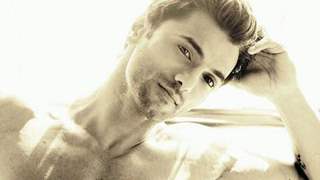 bballgrl 13 years ago muski and rahul u guys better come bak real soon!!! we miss u in dmg!! i want armaan and ritz back too

+ 3
13 years ago True. I agree with you, he is way too good to b compared with KSG. Mayank youre the best. Luv you. Miss you.

+ 3
13 years ago Gud dat he is having a gr8 tym but im missing him a lot lot lot in DMG. Im missing Drashti too. Please come back back asap Mayank. We love you loads. I want my Rahul Muskaan back at any cost.

13 years ago missing him in dmg.even muskaan is not seen nowadays.