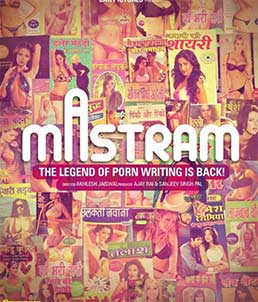 Since its inception, "Mastram" has created a lot of buzz, and now the makers are making every effort to promote it. From designing 35 different looks to distributing one lakh free audio CD, producer Sunil Bohra is using innovative tools to take his film to a wider audience.

Writer-director Akhilesh Jaiswal has translated real life mystery into reel story with "Mastram", a fictional biography of the well-known Hindi erotica writer whose identity is unknown till date.

The movie neither has big names, nor is it a big budget offering, but such is the buzz around the film that buyers are queuing up to grab the rights of the film.

"If rumours are to be believed 'Mastram' is being offered a whopping nine digit figure for its all-India rights," said a source close to the project.

Vohra is also using New Media extensively to promote "Mastram". The film's trailer was among the fastest to garner seven-digit clicks in record time.

If that was not enough, paintings on the wall, bus shelters, OOH and the song "Achko Machko" have fed the curiosity factor.

This summer, "Mastram" is set to scorch the box office.

I do yoga, free hand workout and meditation- Gurpreet Singh

Before Death, SP Balasubrahmanyam Has Sung For Upcoming ...
41 minutes ago

Sushant's Family Displeased With Attention Being Diverted ...
43 minutes ago

After Ten Months Jacqueline Fernandez has Finally Re-united ...
53 minutes ago