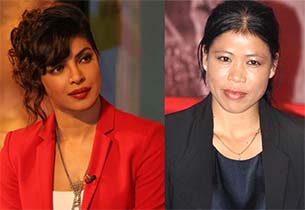 The shooting of Priyanka Chopra-starrer film "Mary Kom", a biopic on Olympic bronze medallist M.C. Mary Kom, has been wrapped. The actress has thanked the team for their endurance.

Expressing gratitude to the film's director Omung Kumar and producer Sanjay Leela Bhansali, apart from other crew members, she tweeted: "It's a wrap on 'Mary Kom'! Thank you Omung, Sanjay sir, Sandy, Saiwyn, Keiko, Darshan and my whole crew who endlessly silently endured to create..."

The National award winning actress not just went through intense physical training for the role, but she also spent a considerable amount of time with the champion herself to understand the real life character closely so that she could bring it out on reel more effectively.

"Mary Kom" is due to release on Gandhi Jayanti Oct 2.