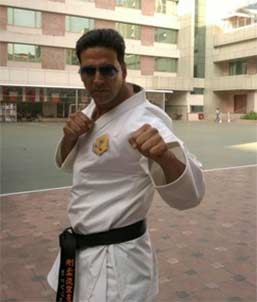 A six-degree black belt holder in martial arts, Bollywood star Akshay Kumar's dream is to make martial arts a compulsory subject in school for both boys and girls, saying it is as important as physics or maths.

"I am in talks with the government to have martial arts as a compulsory subject for boys and girls. I look forward to the day every student would learn martial arts for at least three years. It is my dream," he added.

"I want to put my money in it. For me, martial art is not about earning money. It has taught me a lot. I have my own tournament. I invite students from all over the world. I even send them to Japan. I want kids to be taught martial arts in school," he said.

He practices what he preaches and teaches his son Aarav martial arts.

"Yes, my son is a brown belt. He has just won a gold medal in judo at the national championship. I am a proud father. I am happy he is doing this," said the actor.