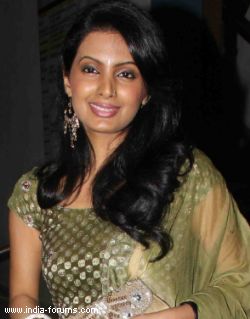 Geeta Basra, who is said to be dating cricketer Harbhajan Singh, finds engagement-marriage rumours infuriating because these can harm her career, which is yet to take off.

'He (Harbhajan) is a dear friend. Look, everyone in this industry has a personal life. I am not saying I am single or not single. Beyond that, whether we are getting married or not...I am not getting into all that. I am here to work really hard. And it hurts to hear my hard work being trivialised by such rumours,' she said.

'I've shot a terrific item song for 'Zilla Ghaziabad'. Rumours of an engagement or marriage at this juncture would definitely harm my career. There is no shaadi on the anvil. Such talk will take my career 10 steps backwards. I can't afford that. When producers hear such rumours, they will obviously say, 'Isski to shaadi hone wali hai.' I've been hearing such talk for three years. How come I'm not married yet?'

Reacting sharply to the latest engagement rumours, Geeta said: 'I've been getting updates about my private life in the papers. Now they're even drawing up a list of the guests. Let me set the record straight. He (Harbhajan) is my very good friend. But we aren't getting engaged or married. My personal life is my personal life. No way am I going to use it to stay in the news.'

Refuting the January engagement rumours, Geeta said: 'I am not getting engaged. Maybe he (Harbhajan Singh) is. You've to ask him. Forget enagagement or marriage, I am starting a new movie in January. Let January come and the world will know. Why do I need to say anything? As per reports, Itni baar hamari breakup aur shaadi ho chuki hai. I feel there's no need to clarify anything.'

'Who is giving these reports on my engagement and marriage?'

Geeta's last release was 'The Train' in 2007 and she is making a comeback with an item song with Sanjay Dutt in 'Zilla Ghaziabad'.

She admits she has waited long to sign a new film.

'Three years is a very-long time in the entertainment industry. But it was a conscious decision. I had so many offers. It was very hard to turn them down. You can't imagine the number of films I've turned down in the last three years, including 'Golmaal Returns'. Even the money was good. Everyone kept advising me, 'Geeta, you've to be seen'. But I knew what I wanted. I had to wait. And I had no godfather to guide me.'

In three years, apart from other things, Geeta did a music video with Rahet Fateh Ali Khan.

Geeta gets charged up at talking about her item song.

'I love dancing. I always wanted to do an item song like Madhuri Dixit's 'Ek do teen'. In fact, I came down from London to Mumbai because I was inspired by Madhuri. I wanted at least five days to rehearse. But there was no time. I had to virtually get ready in a day. Luckily my choreographer Remo D'Souza is so calm. It's so difficult to perform an item song. I don't know how Madhuri made it look so effortless,' she said.