Mumbai, Feb 2 (IANS) Saif Ali Khan has solemnised his affections for Kareena Kapoor in an unexpected way. He has got her name tattooed on his arm.

Admitting for the first time to the permanent love mark, Saif told IANS, 'Yes, I've tattooed her name. It's on my forearm. And very visible to the world.'

According to friends of both, he has never been more committed in a relationship. Marriage is definitely on 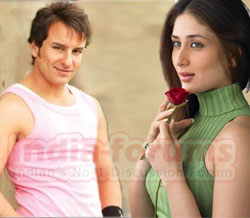 A close friend said: 'There's a kind of fierce and single-minded determination in Saif to make this relationship work for keeps. And it isn't a defiant determination to disprove the cynics who say it won't last. Saif doesn't give a damn about what people say. He has always gone by his gut feelings, regardless of others.

'Earlier, after Rosa left, there were whispers of Saif being involved with various ladies. Saif doesn't like the image of the Casanova at all. He thinks he's too grown up for it. He wants stability in his life and a relationship that's for keeps. He believes he has found it in Kareena. Come what may, Saif will make this relationship work.'

Earlier, when the couple were together in Bangkok shooting for Kunal Kohli's film, Saif's co-star Rani Mukerji was privy to many sessions of his outpourings on his love.

Kareena and Saif then brought in the New Year in Hong Kong with Saif's two children.

Now shooting in Greece for Yash Raj Films' 'Tashan', Saif and Kareena spend as much time together as possible, oblivious to all around, though they don't have too many scenes together in the film.