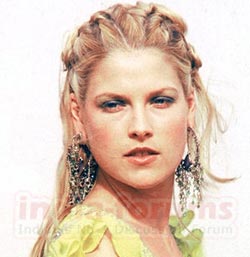 Featured Video
Willard Carroll might not be an A list filmmaker from Hollywood but he has a decent body of work there, which includes a film called ‘Playing By Heart’ with the likes of Angelina Jolie, Dennis Quaid and Sean Connery. But looks like he is quite floored by Hindi cinema and with ‘Marigold’ he seriously was trying to get into the Bollywood groove. Because at the end of day, ‘Marigold’ doesn’t come across as a Hollywood movie in any way, except for the presence of the bright female lead Ali Larter. In short, the film has nothing novel to offer as is the case with most Hollywood films that have actually inspired so many of our filmmakers in so many years.

Ali Larter of ‘Final Destination’ and ‘House on Haunted Hill’ fame stars as Marigold Lexton, a small time American actress who arrives in Goa to film a low budget Hollywood film. It’s only when she sets foot here, she learns that the financing of the movie has fallen through, but thanks to luck and chance, she gets a part in a Hindi film. Its here that she meets and gradually falls for Salman Khan’s Prem(yet again) who taps her dancing talent and arouses in her a sense of closeness and belonging. But very soon, while on a visit to Prem’s palace (he is actually a prince from Rajasthan), she learns that he is engaged to Jahnvi (Nandana Sen) and she can’t really fulfill her dreams with him. And there is the track involving her American boy friend Barry (Ian Bohen) who makes his way there in search of her.

In ‘Marigold’, a lot of things happen just for the heck of it, just like any other formula Hindi film. The love track between Salman and Ali looks forced, you don’t really know when and how they fell in love. From the sets of their film, the lead pair suddenly and easily make their way into Rajasthan. It seems as if Nandana Sen and Ian Bohen have appeared to create forced complications. Salman’s parents (Vijayendra Ghatge and Kiran Juneja) also appear disinterested about the whole marriage issue. The bar scene with Salman Khan and Ian Bohen is pure cliché again.

Ali initially mouths a dialogue as to how life is not a Bollywood movie where people walk into the sunset but ends up doing just that in the film’s hackneyed climax. The song in the end also looks completely out of place. 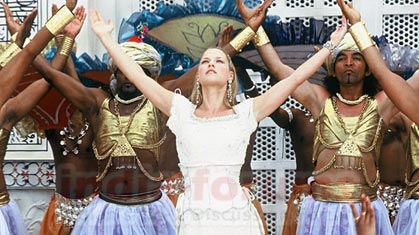 Salman Khan has nothing new or special to do in his ‘so called’ Hollywood film. Ali Larter is a fine actress and is obviously the best thing, ‘the spark’ of the movie. She makes the best use of whatever the film has offered her. She looks fabulous and is in character throughout. She has carried off her Indian look well and even dances well to Hindi film songs just like a Hindi film heroine.

Suchitra Pillai and Rakesh Bedi perform well too but the same can’t be said about the rest and this includes Nandana Sen who actually has quite a small role. Vikas Bhalla and Simone Singh are over the top and loud.

The saving grace is the fact that the film is not too long. New editor Anuradha Singh surely has experimented with the editing (the scene transitions appear different).The sets appear colourful and Anil Mehta’s cinematography is as usual, good. The dialogues and the music by Shankar Ehsaan Loy appear strictly okay.

Only if Willard Carroll had used his Hollywood sensibilities in ‘Marigold’ and not set about this way to make a Bollywood style film, probably this would have been a much better ‘East Meets West’ experience.