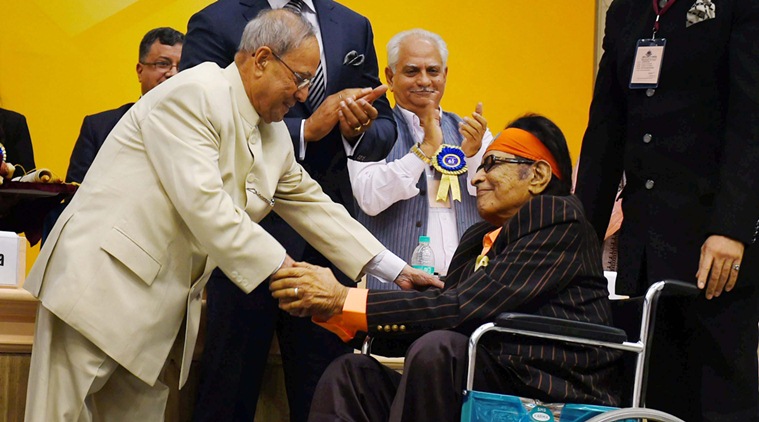 The 78-year-old looked frail in a wheelchair, but high on spirits as he waved to the cheering crowd when he got on to the stage. Mukherjee honoured the cine icon, whose career began in 1957, at Vigyan Bhavan here.

After an illustrative film narrating the journey of the star in showbiz, Manoj Kumar was welcomed on the stage with a standing ovation from the guests, among them Bollywood celebrities Amitabh Bachchan, Sanjay Leela Bhansali, Kangana Ranaut, Aishwarya Rai Bachchan, Abhishek Bachchan, Shabana Azmi, Javed Akhtar and many others.

Manoj Kumar then pulled out the idol and presented it to the President.

Dressed in hues of saffron on his shirt and head band, the actor also touched Mukherjee's feet in a traditional Indian gesture of paying respect.

The Dadasaheb Phalke Award is conferred by the government of India for outstanding contribution to the growth and development of Indian cinema. The award consists of a Swarn Kamal (Golden Lotus), a cash prize of Rs.10 lakh and a shawl.

The honour is given on the basis of recommendations of a committee of eminent personalities set up by the government. This year, a five-member jury -- Lata Mangeshkar, Asha Bhosle, Salim Khan, Nitin Mukesh and Anup Jalota -- unanimously recommended Manoj Kumar for the prestigious award.

Born in July 1937, in Abbottabad, then in pre-independent India and now in Pakistan, Manoj Kumar shifted to Delhi when he was 10. After graduating from Hindu College, University of Delhi, he decided to enter the film industry.

After debuting with "Fashion", he got his first lead role in "Kanch Ki Gudia" in 1960. And his image as the patriotic hero started with the 1965 film "Shaheed", based on the life of freedom fighter Bhagat Singh.

After the Indo-Pakistan War of 1965, Prime Minister Lal Bahadur Shastri asked him to create a film based on the popular slogan "Jai Jawan Jai Kissan". The result was Manoj Kumar's magnum opus and his directorial debut, "Upkar" (1967).

The film helped him to bag the National Film Award, and it was also the first time that he took on the screen name Bharat -- which he used in multiple films thereafter.

His body of work was recognised by the Indian government with a Padma Shri, the fourth highest civilian award, in 1992.

Sushant Singh Rajput's Sister Pens an Emotional Poem for Him ...
5 hours ago