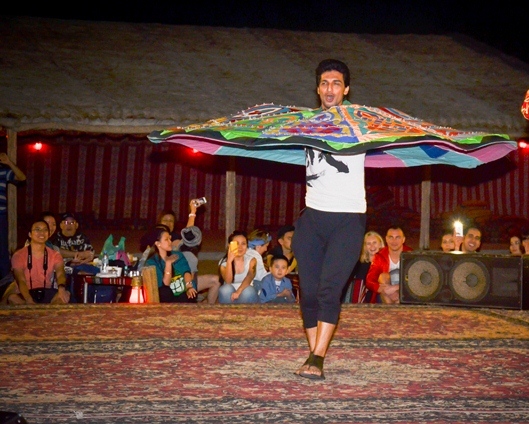 Actor Manish Raisinghan who is known for his great sense of humor and sporty spirit, recently had quite an adventure when he was in Dubai. The actor made sometime after his performance in Dubai to tour the city and during the dessert safari we hear that he was thrown a challenge.

While watching the tanura and belly dance as part of the safari, Manish was challenged by the Tanura dancer to compete with him to spin d way he does and Manish took it up very sportingly as he danced away in front of the crowd.

When we asked Manish he said, "It was an experience. The guy made it look so simple that I took up challenge n fortunate enough to not collapse on stage after taking those spins and  like the say in Karan Johar films Hum ek baar jeete hain Ek baar marte hain. So why not live it up to the fullest and that's why I don't leave a single opportunity of anything that's worth trying."

And yes we hear that the girls in the audience were quite excited to watch Manish dance as the actor has quite a fan following amongst the female lot.

+ 2
6 years ago Love manish raisinghan as siddhant he is multi talented person. Ssk cvs will never understand that

+ 2
6 years ago Manish Raisinghan keep rocks. We love you.

+ 2
8 years ago waiting for the release of both films this year Salman...All the best and love youuu

+ 5
8 years ago all the best with this movie salman! cnt w8 for this song!