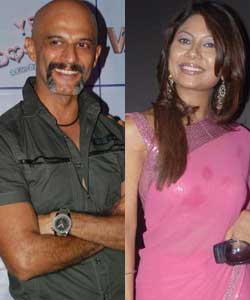 We have already reported that Apurva Agnihotri,Ojaswi Oberoi, Monica Khanna, Siddhant Karnick, Aham Sharma  and Mouli Ganguly are going to be a part of the venture which will be based on dance based reality shows.

The latest we hear is that Maninee Mihir Mishra who was last seen in Chhoti Si Zindagi and Rajesh Khera (Survivor India-The Ultimate Battle) of fame, one of the contestants of Star Plus' Survivor, will be part of the show.

We contacted Maninee who confirmed the news, " Yes I am doing the show but can't divulge the details about the character. All I can say is that it's one of the best shows and the characterization is very exciting. With this show I can manage my other work as well.It was a very calculative decision to take it up."

Soorajvt 6 years ago Angad the dancer was great . Aham Sharma , u rock..

rekha02 8 years ago A promising cast . Looking forward to Apu's next avatar .

adigaag 8 years ago Reminds me of JJKN my favorite serial of all times...AA your rank needs to go up

sami01 8 years ago waiting for u apu...awesome and intersting cast ..so many talented people in it really looking forward

shanti05 8 years ago Looking forward to see Apurva back on screen,TB plzz give us the characteristic of Apurva also it wud be awesome, nevertheless there are some amazing starcast joining this show good luck to the show !

shanaya28 8 years ago some talented actors joining AKA..i feel the show will be fantastic and of course my fav actor in there apoorva so cant wait for it to be on air..all the best to the show and all the actors ...

rekha02 8 years ago Wow, Armaan Sir, Maddy and Pari together again in one show, Iam reminded of the old days and the rapport these three used to have in JJKN.
Thanks for the article.