As reported earlier by tellybuzz, that Zee TV and Pavitra Rishta team is all grooved to delight its viewers with a 2 hours extravaganza on the occasion of Ganesh Chaturthi. 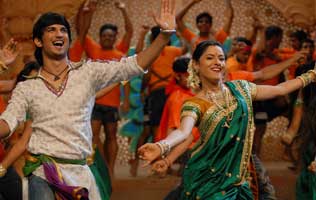 On this auspicious event on public demand to see the main leads together, the creative team has worked on a sequence wherein the audience will be in for a treat as they would see their beloved couple Manav (Sushant Singh Rajput) and Archana (Ankita Lokhande) perform on a dance number. Amidst all this festive occasion there was someone who expressed sheer disappointment on the track.

As per the present track there are enough differences persisting among the couples as Manav is getting married to Shravani and Archana is tying the knot with Jaywant.

So there was a buzz that Producer Ekta Kapoor was very upset with the creatives idea of making her lead protagonist dance together as she felt that it didn't fit in the existing track. Also she didn't want to make things frivolous by throwing in a dance act for the heck of it. But as the couple had been rehearsing for the act since past three days. So the creatives convinced Ekta, took a mid way and decided to televise the entire dance act as a dream sequence.

When contacted, Sushant Rajput asserted, "Yes mine and Ankita's dance sequence was always supposed to be a dream sequence so have no clue about Ekta Madam's reaction on the same. But yes I was also supposed to perform a dance with Archana and her family which got canceled at the last minute as it didn't fit in the track."

As from long viewers have been seeing Sushant just sob in the show. So when inquired about his level of excitement about the festive track, in a jovial tone he said, "I'm very much excited and as dancing is my passion I enjoyed a lot. And Ankita is also a terrific partner to dance with. Also we are performing on a fusion of 3 songs, two of which are romantic tracks and third one is my solo performance."

So, watch out for a fun-filled action packed Ganesha extravaganza on Zee TV's Pavitra Rishta at 8 PM on Sunday, 19th September.

10 years ago they are showing ganpati utsav. Why doesn't they show them dancing in bhakti songs like that of wanted,don-srk,etc?

+ 4
10 years ago can't wait
"And Ankita is also a terrific partner to dance with." *cough cough*

10 years ago Yay yay cant wait to see both of them together! This show is turning so boring I really want Manav and Archana together now.

+ 5
10 years ago Yes its public demand.We wanted to see them dance together.Enough of them crying now.