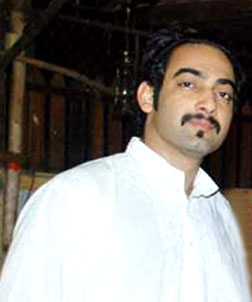 Sporting a spectacle and a not-so-manly look, playing the role of a diffident and weak minded character, Manav Vij won accolades as Joydeep. Manav Vij gets a breather atlast , as Joydeep’s character turns over a new leaf with his brand new image makeover in Kyunki Saas Bhi Kabhi Bahu Thi.

Telly Buzz Team got to speak to the actor to know more on his makeover and his take on it. “Very Good, Excellent. This makeover shows the character’s growth which will be loved by the audience as well as the actor”, came Manav’s quick reply. On asked whether this makeover will open the doors for Manav’s fan following to increase, he laughs it out, saying, “Hope So, It is for the girls to say now!!” Will the makeover be marked by new mannerisms?, “Joydeep now comes across as a more confident guy, the makeover is in the Attitude. The previous Joydeep was under-confident, had no conviction whatsoever. He was not retarded, but could not even manage to walk straight, was such a weak minded fellow. People are so used to seeing Joydeep in his old look, this change will surely be hard hitting!”, says the actor. Does this mean that we will see a love story now between Bhoomi and the New Macho man, Joydeep? “Interest of Bhoomi towards Joydeep will surely increase now, but whether this develops into a love story or will shape up to be a start of another adventure depends on Ekta…”

So while the character’s makeover is creating a lot of excitement, whether the story will be able to hold the audience’s excitement for long is yet to be seen. Till then, hope the audience love this new Joydeep as much as the actor himself does it.

14 years ago he has turnd out to be so cool aftr the makeover!!!

14 years ago I had never ever expected him to look so good! seriously, LOL, He looks so different and handsome!!! :D

14 years ago i was shocked to see him like this. i really liked his new look. wayyyyyy to go joydeep and manav.

+ 3
14 years ago YOu should've shown us the before and after pics!

14 years ago he looks totally handsome...

and his walk and talk ...i think he has beaten lakshya...

14 years ago yea he does look better! Anything is better than what he was before lolz