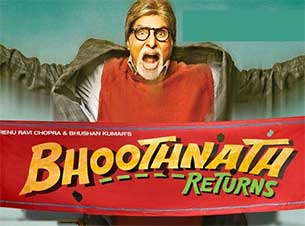 Amitabh Bachchan-starrer "Bhoothnath Returns" -- a movie that emphasises the importance of voting -- should be made tax free so that its message reaches a wider audience, the Election Commission has been urged.

In a petition to the commission, a media organisation here said that tax free status for the film, which is doing well at the box office, would only be appropriate as the country is in the middle of a general election.

"The state governments should support the strong social message that emanates from the film. Granting tax-free status to this film would make people aware about their rights as voters like making voter ID cards or not treating polling day as holiday," the petition by U4U Voice said.

In the film, a ghost (played by Bachchan) gets friendly with a child and then contests elections against an evil and greedy politician.

"Declaring the film tax-free at this stage would only mean that more people can watch it and, thus, help spread the message across," the petition noted.

The film details how the duo - the ghost and the child - realise the depth of issues like corruption rooted in the country and how the slum kid coerces "Bhoothnath" to fight an election.