Mumbai, Dec 19 (IANS) It wasn't easy to direct Madhuri Dixit in her comeback film, but director Anil Mehta thanks the actress for making it a smooth ride for him.

'She's such an easygoing person. She never let me get stressed about making Madhuri Dixit's comeback film. She was willing to give all of herself,' Mehta told IANS in an interview.

'She's still in equally splendid form. And she's bridging eras. She not only represents the kind of films that were made in the 1980s, but also cinema of today where she has a prominent place. It was such an asset to have her on the sets,' he added. 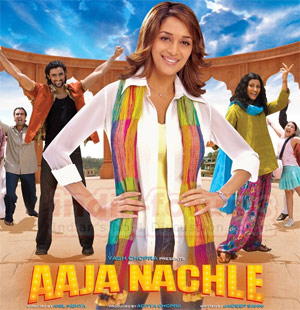 'I told Aditya Chopra of an idea about a small town setting. Those big urban fables don't interest me. The film may look lavish because of the dances. But I've kept the treatment very simple.'

Q: The small-town ambience in 'Aaja Nachle' is splendid.

A: We created it on a set in Mumbai and if people thought it was a location that's a big compliment. I went on a 20-day recce, checked out towns like Bhopal and Indore. Lots of real construction material was used on the sets. We wove in the chaos and confusion of a small town into our fictional town.

Q: Did Madhuri come into the picture before or after you wrote the script?

A: It's a bit of a chicken-and-egg thing. The idea was floating in my head. Then Madhuri was cast and the story just flowed from there.

Q: Did Madhuri make it any easier for you?

A: She's such an easygoing person. She never let me get stressed about making Madhuri Dixit's comeback film. She was willing to give all of herself.

Q: The last image we have of Madhuri is as Chandramukhi in 'Devdas'.

A: She's still in equally splendid form. And she's bridging eras. She not only represents the kind of films that were made in the 1980s, but also cinema of today where she has a prominent place. It was such an asset to have her on the sets. Right now I'm this lady's biggest fan.

Q: Did you ever anticipate furore over a line in a song?

A: Not at all. If you look at the spirit of the film, it isn't about discrimination, it's about the participation of people from all walks of life.

Q: My objection to 'Aaja Nachle' is that the dances in the film do not represent our traditional culture.

A: Please define culture. It varies from person to person. The film is more about those cultural spaces where people can come together. My film wasn't aimed at propagating a purist culture. It's about bringing people from different walks of life for one endeavour. I didn't want to define culture.

A: I'm sure even theatre purists will find complaints against it. Even as a play is staged there's cinema seeping into the sequence. But yes, again I wanted to depict a participative spirit. In college I've dabbled in theatre.

Q: You're known to do work only now and then.

A: That's why I moved from Mumbai to Bangalore. I wanted to live peacefully. But somehow I've worked at my own pace. I was fighting shy of direction for long. One day when I was shooting 'Veer-Zaara' Aditya Chopra asked me if I wanted to direct. I've kept the treatment very simple.

Q: Why did you choose to hand over the cinematography to someone else?

A: I purposely made that choice. You've to be very talented to do both direction and cinematography. When I took Mohanan on, I let him interpret my vision from the start. The whole business of direction is so all consuming, I left all others aspects of the film to others. Cinema to me is about collaboration with everyone including choreographer who in this case is very important. I'd always insist on getting a cinematographer on board when I'm directing.

Q: What would your next directorial assignment be?

A: I haven't given it any thought. Even as a cinematographer I never planned to take on another project before finishing the one I was doing. I intend to do the same as a director. After 'Aaja Nachle' it's my time to hibernate.