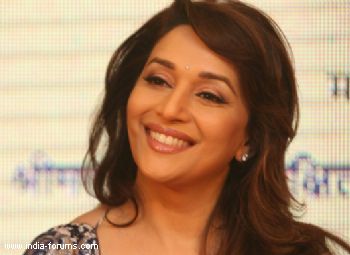 Chitrangada Singh, who has done an item-song for Shirish Kunder's "Joker", says her look in the song is inspired by Madhuri Dixit's in the song "Humko aajkal hai" from "Sailaab".

"I don't like to call it an item song, it is a dance performance that I have done for the film. It's called 'Kaafirana' and it is very rustic, very 1980s in its look and it is a little bit of Madhuri from 'Sailaab', that's the kind of look that we have been inspired from," said Chitrangada.

"It has a bit of 'laavni' in it, it's fantastic," the 35-year-old said at the unveiling of the cover page of men's magazine FHM, which features her.

Chitrangada, who has adorned the cover page of various magazines, says print photo shoot is challenging, but at the same time comfortable also.

"I think what's good about shooting a print picture is that you have to do so much more within that one frame or one shot. You have to look the part, you have to have the right expression, everything has to be perfect," said Chitrangada.

"But at the same time, I think there is a lot more control when you are doing print so you are lot comfortable. If there is something wrong you can get it fixed later, that is not the final thing going out. Whereas if you do a film, there is one long shot that you have to give and that's it," she added.

Chitrangada was last seen in "Desi Boyz" and is currently working on "I, Me Aur Main" opposite John Abraham and a Sudhir Mishra film opposite Arjun Rampal.