Mumbai, Jan 14 (IANS) Tamil star R. Madhavan describes his journey from Malaysia to Jamshedpur in Jharkhand as the craziest adventure of his life.

'And I'm ready to produce a film based on my adventures this weekend,' laughed Madhavan, who recently turned producer with a highly-acclaimed Tamil version of Nishikant Kamath's 'Dombivali Fast'.

The actor and his wife Sarita were holidaying in Malaysia for the New Year when he came to know that Tata Steels wanted to felicitate him in Jamshedpur as a part of their centenary celebrations.

'I was informed on Friday about the function to be held on Saturday, Jan 5. I was aghast. How could I make it from Malaysia to Jharkhand in 24 hours? But there was no wa 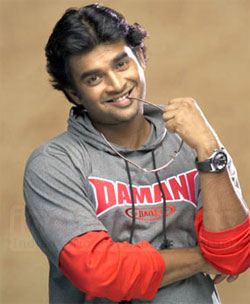 Featured Video
y I'd give this the skip. I had to reach Jamshedpur, no matter how,' Madhavan told IANS. He had grown up in the steel town.

'So, I took a ship from Malaysia to Singapore. From Singapore harbour I took a boat to the port. Then I quickly caught a flight from Singapore to Chennai and then a domestic flight to Kolkata. Then on a twin-engine aircraft I reached the mines area near Jamshedpur. From there the Tata Steels chopper brought me to the venue,' he added.

The ordeal as they say, had only begun.

'By now I felt jet lag was invented only for me. Panting and puffing I reached the venue of where Shankar-Ehsaan-Loy were performing. That's when things started to go really wrong.'

The Tata Steels people expected a crowd of about 10,000 people.

'Instead 40,000 people had turned up. The mob turned unruly and before Imtiaz Ali and I could be felicitated - yes, he too is from Jamshedpur and was also invited - the show had to be called off due to unmanageable crowds.'

'I'm never going to be anywhere near a Shankar-Ehsaan-Loy concert as anything but a fan in the audience. Just kidding, actually,' chuckled the actor.

'I'm a big fan of theirs. They're doing the music in two of my Tamil films. And I love their music.'

But that was a dejected director-star pair leaving Jamshedpur on Sunday morning.

'Chalo, at least Imtiaz had to go back after coming from Mumbai only. Imagine my plight! The journey I undertook to reach my hometown for the honour puts Gulliver's travels to shame. Imtiaz should make a film on our adventures called 'Jab We Wept'.'