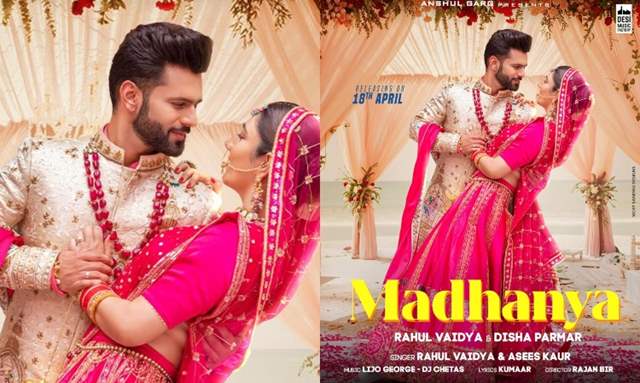 The trend of music videos has been at an all time rise and how. While we have seen some of the finest on-screen couples thanks to the format of short-form content, we have also seen some real-life couples making quite the splash with their music videos and also garnering a lot of applause for the same.

For a while now, Rahul Vaidya and Disha Parmar have been in the news as the BTS photos of their upcoming music video took over the internet. And now, the official poster of their music video, titled Madhanya, is out now. Both of them look absolutely loved up as they are all set to present the wedding song. They are both seen posing in what is rather one of the most classic poses while dressed up in wedding avatars. The song will be out on April 18, 2021.

Sung by Rahul Vaidya himself, also lending her voice to the song is Asees Kaur, who has been in the news for some of her latest hit tracks as well. With one of the most popular couples taking centre stage with this music video, we bet fans can't wait to see what is in store.

As for Rahul and Disha, the duo celebrated their first festival as a couple just yesterday (Gudi Padwa) and have been making the most of their time together as can be seen in the photos doing the rounds. The two made it official when Rahul was locked up inside the Bigg Boss 14 house and while he proposed on national television, Disha also replied to him when she came on the show during the Valentine's special week. And now, all that there is for the two to take the plunge soon!