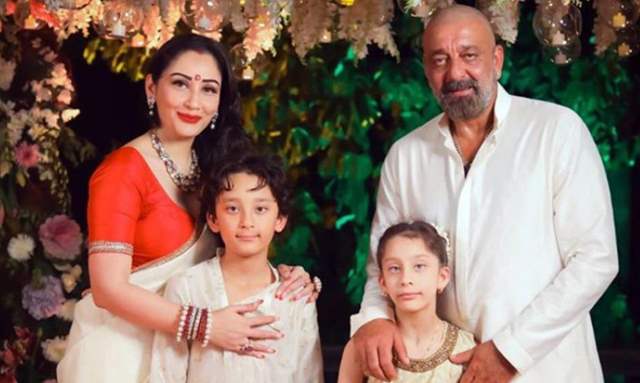 Sanjay Dutt remains to be in quarantine in Mumbai while Maanayata Dutt has been stranded in Dubai with her Kids. The couple is blessed with twins - Shahraan Dutt and Iqra Dutt. However, it seems they might not return anytime soon considering the government’s decision to extend the lockdown.

In an interaction with ETimes Maanayata got candid about not being with husband Sanjay Dutt and the family in these tough times of COVID-19.

The 41-year-old spoke about handling the kids alone and how they continue to be in touch with their father who is in Mumbai. She said, “We were in UAE when the lockdown was imposed, so thankfully books have helped too. And since Sanjay is back home (In Mumbai), the kids often video call him and they keep themselves entertained. The boys - Sanjay and Shahraan - continue with their normal masti and they keep themselves occupied.”

Maanayata further revealed how things would definitely have been easy if they were living together as a family and not in different countries.

I just wish we were together as a family and not living in different countries. Things would definitely have been easy and lockdown wouldn’t have looked like a task as this would have been the perfect time for Sanjay to spend time with the kids. So this is something I regret a little. The lockdown was sudden and unexpected, so being away from home feels bad but in the end, we make the most of it.

Previously, even Sanjay Dutt spoke about his wife and revealed he has been missing his family. He said, "I am also spending a lot of time connecting with my family virtually which is the most important thing in my life. When the lockdown was announced, unfortunately, Maanayata and my children were already in Dubai. In the past, I have spent periods of my life in a lock-down. Back then and even now, the one thought that stays with me is the way I miss my family. For me, they are everything. Thanks to technology, I can see and talk to them multiple times in a day, and yet, I miss them terribly."

On the work front, Sanjay Dutt is going to be providing his audience with an array of explosively entertaining films as he has a busy year set for him with five big-banner films - KGF: Chapter 2, Shamshera, Bhuj: The Pride of India, Torbaaz and Sadak 2 down his pipeline.

Late Jiah Khan’s Mother Rabya Slams Bollywood Mafia As She ...
a minute ago

CINTAA ties up with Zindagi Helpline for combating suicides, ...
38 minutes ago

Sushant Singh Rajput Revealing about the Moment he Got Very ...
38 minutes ago