As we continue the month of poetry by honoring India's very own lyricists, on this week's pedestal is none other than the multi-talented Javed Akhtar.
Born on 17th January, 1945 to the well known Urdu poet and film lyricist Jan Nisar Akhtar and his wife Safia Akhtar, Akhtar comes from a lineage of freedom fighters, being the great-great-grandson of Fazl-e-Haq-Khairabadi, the front runner during the Indian Rebellion of 1857. 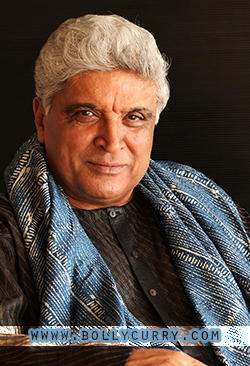 Akhtar started writing at a very young age in 1964, which is when he moved to Mumbai to pursue his dreams. In his early years in the city of dreams, he earned merely Rs.100 for penning dialogues for low budget films. However, he soon moved to the much bigger 1969 film, Yakeen, starring Dharmendra and Sharmila Tagore. Unfortunately, due to the movie's failure at the Box Office, the struggles continued for ambitious writer.
The turning point in Akhtar's life was when he met the legendary Salim Khan, who was a small time actor and an aspiring writer at the time. Sarhadi Lootera was the film that brought these two great minds together; writing for the movie later resulted in a long-term friendship. Since then, a great partnership was born that hit it off well and thus, both were fondly known as the Salim-Javed duo. Their big break came in the form of G. P. Sippy's Andaz, followed by many other successful movies such as Seeta Aur Geeta, Sholay, Don and many more.
It wasn't until the 1980s that Akhtar took interest in composing lyrics. The Amitabh Bachchan and Rekha starrer Silsila was his first tryst with composing lyrics, which was stupendously successful. Til date, the film is still remembered for its heart wrenching poetry. Since then, he has written lyrics for over 80 movies. In 2008, Akhtar became a judge for the popular reality show Indian Idol 4 along with Anu Malik, Kailash Kher and Sonali Bendre Behl.
Akhtar has been awarded on countless occasions for his talent including winning the National Award five times for his work in the films Saaz, Border, Godmother, Refugee and Lagaan. He has also been honored with Padma Shri in 1999 and again in 2007. Recently, in 2013, he received the Sahitya Akademi Award in Urdu, which is India's second highest literary honor.
As we remember and pay our tribute to this remarkable being for his achievements not only to the film fraternity of Bollywood but the community overall; BollyCurry leaves you with few of his famous works till date. Don't forget to mention your favorites in the comments below.
Author: Komal P.
Editors:  Ritchelle C. and Jenifer Y.
Graphics: Shikha A. and Komal P.
Do you have a suggestion or comment for BollyCurry? Drop us a PM at BC_Dropbox today.
6 Likes