The Sagar Arts epic, Ramayan on NDTV Imagine has brought a new trend on television, and after doing extremely well in this one year, there begins a new chapter now, with the entry of Luv and Kush!!. 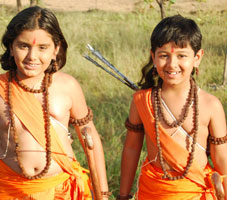 
"A new chapter of Luv and Kush will be starting soon on NDTV Imagine. The first episode of that will go on air from March 9, i.e. coming Monday," says our khabroo.

The story goes as follows with Sita returning to Ayodhya wasjust not the end of her Agnipriksha', as Ram is in a dilemma as he overhears unpleasant remarks made by a common man about Sita. Sita realizes that Shri Ram is torn between his respect and love for her and his moral duty as a King. Sita volunteers to leave the kingdom and take refuge in Rishi Valmiki's ashram. Here she gives birth to Luv and Kush and devotes herself completely to the upbringing of her children.

The star cast remains the same. "The only difference will be that now Gurmeet Chowdhury and Debina Bonnerjee will be joined by Rishabh Sharma and Perin Monish Malde who will be essaying the role of Luv and Kush respectively."

The role of Lakshman is played by Ankit Arora, Bharat by Vije Bhatia, Shatrughan by Lalit Negi , Hanuman by Vikram Sharma and Rishi Valmiki by Raman Khatri .

13 years ago Thanks for the article...
Kids are cute and all actors of Ramayan are superb so no doubt they also gonna rock the show..

13 years ago It''s gr8 that Sagar Arts will go on Lav&Kush !!
But also painful , that the happiness parts will be finished soon ! Sita maya going away & Raja Ram soona soona hai !

13 years ago hmm so soon

and abt the wig

oh he is not indrajeet he is copying indrajeet
haha

13 years ago eagerly waiting for this part..
our Ramji and sitaji in mew avtaar mumma papa...
woow tht is cool
welcome new mebers our Golu molu Luv kush
so sweet

13 years ago Can''t they put some wig on that second guy''s head? They showed shooting yesterday and his hair was looking pathetic..... sorry but it really was looking bad...