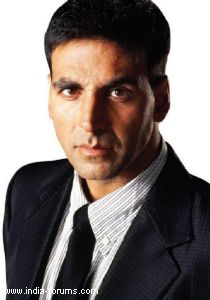 Mumbai, Sep 20 Actor-producer Akshay Kumar took time off from the shooting of 'Joker' to promote his first Indo-Canadian venture 'Speedy Singh'. Vinay Virmani, who is debuting with the movie, says he is lucky to have the Bollywood star's support.

Akshy visited Golden Temple in Amritsar and joined Vinay's parents and sister and co-star Camilla to pray for the film's success.

'I'm very lucky to have Akshay uncle's support. He's a role model. But more than that he is someone who understands Hindi commercial cinema. That's where I want to be,' said Vinay, who is Toronto-based businessman Ajay Virmani's son.

Directed by Robert Lieberman, the film is about ice hockey and Akshay makes a special appearance in it.

'I'm completely bowled over by how welcome I've been made to feel in Bollywood and India. Whether it's Akshay Uncle, who's family, or Harbhajan Singh, they've been very supportive and have gone out of their way to support me,' said Vinay.

The newcomer says he grew up in a miniature Bollywood.

'In Toronto, we always had guests from Bollywood. And I grew up surrounded by stars. I speak fluent Punjabi and Hindi. And yes, I am hoping for a career in Hindi cinema.

'Bollywood was always on my mind from the time I was a child. Then I sat down to write the story of what eventually became 'Speedy Singh'. A lot of what you see of the young Punjabi guy's struggle to make a place for himself in the film is taken from my own life,' said Vinay.