Karan Singh Grover has been one contestant who is strongly placed when it comes to junta votes on Sony's Jhalak Dikhhla Jaa. Even though the popular actor has been getting some rough treatment from the Teen Deviyaan courtesy his mediocre performances, his fans have always bailed him out, so much so that he has never had to be in the Dance-Off.. 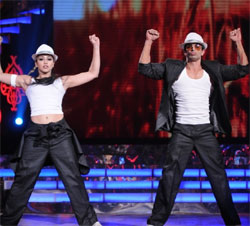 This week was not different at all, as Karan and Nicole ended up being the lowest scorers yet again!! "All three finalists had to perform on three different dances. The first performance was a solo, second was with the choreographer and third was a common song from Kisna. In this Karan was the lowest and managed to get 93 points out of 120 from judges", says the source.

Elaborating on the first performance our khabroo adds, "Karan performed on the song Jaan Main Dum… and he fared decently well, but the judges felt that the music was fast and Karan was trying hard to catch on with the pace of the song".

"Secondly he performed on the song O Maria from the film Josh, and he got good comments for this particular act. The judges appreciated his dance and also said that he had the perfect attitude required for the number. Saroj stated that she is fida on his performance, while Vaibhavi commented that his postures and expressions were very nice", adds the informer.

Lastly he performed on the common song Kisna Hai… from the movie Kisna. "This was his weakest performance as per the judges. Vaibhavi quipped that there was no synchronization. The judges felt that he kept losing his steps even though he managed to complete the whole act. Saroj said that Karan is like a small kid who keeps forgetting his steps", chirps the little birdie.

Prabhu Deva was the celebrity guest on the panel of judges this week. "He gave him decent marks. Basically he was not harsh on any of the participants", concludes the source.

For Karan, the battle now is to show his prowess on the dance floor and please his fans even further!!

aftermath.. 11 years ago of course he will get higher of votes...he deserved it!!

diva5194 11 years ago armaan is the best...he''s working really hard plz vote fr him he has given many good prfrmances ,it feels so sad when he gets bad marks i feel lyk crying armaaan plz dunwrry and pplplz wake up and vote fr armaaan

spln 11 years ago the judgement gets debatable the second they place BB=Gauhar... i dont even have to be a karan fan to go into HOW unfair the judging as been, scripted or not whatever whoever believes... if those tow can tie, with how stupendous gauhar was, KARAN SHOULD win!

shambo88 11 years ago Yesterday Gauhar was by far the best actually cut above the rest whereas Karan was the worst..... But here Karan fans(or should i say fanatics) seem to judge him on everything else apart from his dancing skills(or maybe the lack of it).... Keep voting,we''ve never had winner in the previous 2 seasons... History''ll repeat itself where again base popularity will win over true talent...... For me Gauhar is the winner all the way!!!!!

@Angel@ 11 years ago Hey there Karan

Don''t worry....You''ll hopefully win JDJ 3..!! Best of Luck for the finale and I hope that you give your 100%..no 101 % like always..!! I know you work really hard..!! Don''t Worry..!! We are always there for you and will surely and hopefully vote for you..!! Don''t mind whatever the Judges say..Saroj ji herself said in anger/rage in/during HK Elimination that Hum kya hain? Asli Judges to wo hain. I mean unhien fame ke basis pe dena hai to detay rahien..... So, in heart, she also agrees and knows that we''ll vote for you and admits that we are the judges not they..!! So whatever..!!

Guys..Please Please Please increase the number of votes you give to Karan because this time Gauhar and Baichung have had a tie and so if Baichung gets good votes, that means that Karan will be in the dance-off tomorrow (God Forbid).. And you people already know that the Judges won''t spare a second or give it a well-deserved thought even before eliminating him and getting him out of it..!! So just increase the number of votes please please please..It''s a humble request..!!

Vote for Karan Guys
And Karan you don''t worry...we are always there for you and to vote for you..!! Count us in ALWAYS...!!

We all Love You Karan

Love along with MORE Love and Luck
Love
@Angel@