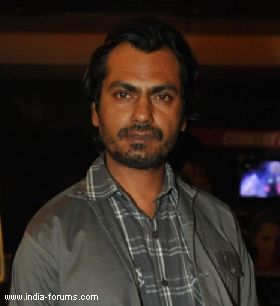 Acclaimed actor Nawazuddin Siddiqui, who is making significant inroads into commercial Hindi cinema, has been signed on to play a major role in the next Salman Khan blockbuster "Kick". He is excited about sharing the frame with the superstar.

"I've been told not to say anything about my role. But I am looking forward to working with Salman Khan. He is such a huge star and doing terrific work," said Nawazuddin.

For now, he is gearing up to work hard for the role of a classical vocalist in a forthcoming film. He would be hiring himself a Hindustani classical vocal maestro to train him.

The film entitled "The Music Teacher", to be directed by Sarthak Dasgupta, requires Nawazuddin to be an adept vocalist. While an expert vocalist can sing for Nawaz, he would like to look convincing while putting forward the nuances, and hence, the tutoring.

The year 2013 kept Nawazuddin busy with international film festivals and he is very surprised with the way the year panned out.

"I thought 2012 was too eventful a year for me to repeat. In 2013, I only had two releases. But by god's grace, I got so much praise for both 'Bombay Talkies (2013)' and 'The Lunchbox'. It continues even now," said the actor, who has been festival-hopping all over the world.

He has just returned from New York after attending New York's South Asian Film Festival where the Nawaz-starrer "Monsoon Shootout" was the opening film.

"Now I go back to the US again to the Sundance Film Festival with Geetu Mohandas's road movie 'Liars Dice'. So it seems the festival journey will continue in 2014. In the last two years, there is a not single major international film festival that hasn't featured my cinema," he said.