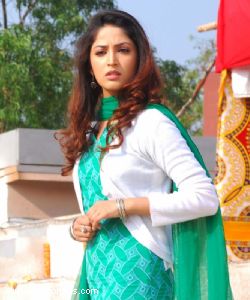 The comeback track of Omi (Chandan Anand) in COLORS' Yeh Pyaar Na Hoga Kam has provided for some interesting viewing!! Even though preparations for Omi and Bittan (Parul Gulati) wedding are happening in full swing, viewers have a slight ray of hope that Lehar (Yami Gautam) and Abeer (Gaurav Khanna) might save the day for Bittan. However, nothing like this is going to happen, as Bittan will eventually wed Omi in Monday's episode.

The coming week will see some big twists happening in the show. As reported by TellyBuzz earlier, Lehar's father Mathur (Tushar Dalvi) is going to breathe his last soon after Bittan Omi marriage.

A little birdie tells us, "However, the most shocking incident will be the kidnap of Lehar, which will leave Abeer aghast. There will be a mystery created as to who actually kidnapped Guddan. The creatives will build up a story line wherein the prime suspects will be Omi, Abeer's dad TN Vajpayee and Alok, Abeer's cousin. Though only one of them will be eventually involved in the kidnap, the motive of all the three is to get rid of Lehar from their lives".

It is believed that this kidnap track will make the bonding between Abeer and Lehar stronger.

We tried calling Gaurav Khanna, but he remained unavailable.

Will Abeer be successful in getting Guddan back into his life?

Let's wait to know how the track moves on…

luvGaurav 10 years ago YPNHK must be brought back...You loose Colors, you lost your raunak and rang.

Neeba 10 years ago YPNHK is the best show..Love Gaurav and Yami as Abeer and Leher..

malwica2 10 years ago pls dont change the show timings!! i beg u!!

Neeba 10 years ago Love YPNHK...Abher rock and YaRav are the best, hot and hit jodi of television...

Neeba 10 years ago Love YPNHk...Gaurav and Yami are rocking..No one can portray Abeer and Leher like they do..

Eksie 10 years ago The suspense around Leher's kidnapping is keeping us on the edge of our seat! Love YPNHK!

Abeer & Leher are the best jodi on television currently! Gaurav & Yami are awesome!!

Hathras case: Kangana Ranaut says 'Have immense faith In UP ...
50 minutes ago