The Lead India final encounter is between Ahmedabad's Devang Nanavati and Bangalore's R K Misra. The duo will now clash in the final in New Delhi on the 9th of February. The episode will air LIVE on Star One at 8 pm. The esteemed guests during the Finale include Arun Jaitley, Abhishek Manu Singhvi, Jaipal Reddy, Ambika Soni, Nitish Kumar, Javed Akhtar, Kiran Bedi, Aruindum Sengupta, Sitaram Yechuria amongst others. 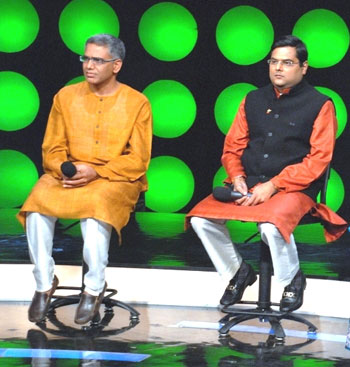 Featured Video
In last week’s episode RK Misra’s five-point agenda included focusing on education and health, with special emphasis on primary education and rural health; educating farmers on sustainable farming and rural employment generation; speeding up infrastructure and industrial development; review of laws dealing with terrorism and ensuring responsive governance and removal of corruption. Kiran Bedi was not too happy with the manifesto and said that it offered nothing new and has no mention of important issues like police and electoral reforms. But Javed Akhtar thought otherwise.

Devang Nanavati’s manifesto had similar points to Misra's - like stress on education, internal security as well as the need to focus on rural economy. He also put forth the point that sports other than cricket should be promoted and that it was necessary to create civic awareness in society. His manifesto though, did not appeal to all the judges. It ended in a close contest. Misra got 36 points, with Nanavati just 5 points behind, at 31. Things will definitely get even more exciting, at the grand final.

As the final battle brews on, the two finalists will be seen presenting their Dream Projects for India which they intend to undertake with the 50 lakh prize money. Apart from the grand prize for the selected leader of India, other awards for outstanding performances through different missions in other episodes will also be given to the contenders. The grand finale will also be the occasion to give away the Cheevening scholarship from the London University (previously announced by the British High Commissioner) to the 3 runner ups. All this & more will take place in the presence of the most famous personalities from the field of politics, science, Bollywood etc.

Who will walk away with the grand prize? Who will be elected as the true leader of India?

Watch the Grand Finale of Times of India’s Lead India, on February 9 at 8 pm on Star One! Tune in and vote for the man whom you think will lead us to a better India.

Ya this show seems to be kool
Mishra saab is not such a good speaker abut tells good points and is opposite to Devang.

14 years ago I just love this show...
its gng to be a great finale

+ 3
14 years ago He is a doer and not the one who just give suggestions.. Our country needs leaders like him who have worked at grass root level and also with private govt partnership..

+ 4
14 years ago i just love this show , asuperb sensible show ,i want MR. MISHRA TO WIN as he raelly seems to be a humble,intelligent & down to earth person !!!