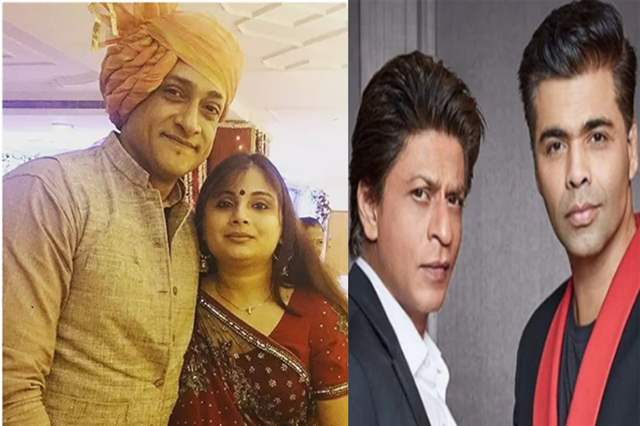 The current debate surrounding nepotism has only charged a lot more than one can anticipate and the trigger for that has been the sab demise of actor Sushant Singh Rajput. It isn't something entirely overlooked and unknown in the industry but the passing away of Rajput has only highlighted all sides of the same a lot more.

Lately, social media has also been flooded with comments on how outsiders keep getting cornered and the apparent 'gang mentality' in the industry is a reality.

Multiple actors have come forward and opened a can of worms further and now, late actor Inder Kumar's wife, Pallavi Kumar has joined the bandwagon. Pallavi posted a long note on her Instagram account accusing Bollywood biggies Shah Rukh Khan and Karan Johar of 'promising her husband' work but that later turning out to be false promises.

In her note, she also stated that just like Rajput, her late husband achieved success on her own and the likes of Khan and Jhar never helped him and, in fact, blocked him.

Her note wrote, "These days everyone is talking about.. Nepotism.... Just like Sushant Singh Rajput my husband late actor Inder Kumar achieved his fame on his own. He was at a peak in 90s. Before he passed away I still remember he went to 2 people big shots asking for work as help. Just for the record he was already doing small projects. But he wanted to do big movies just like he started. He went to Mr. Karan johar, I was there too. In front of me all happened. He made us wait outside his van for 2 hrs. Then his manager Garima comes and says karan is busy. But we waited & wen he came out, he says inder keep in touch with garima at the moment there is no work for you. And inder did that... for the next 15 days ... the fone was picked up saying there is no work at the moment... after that inder was blocked."

Recalling Inder's meeting with Khan on the sets of Zero, she wrote, "The same behaviour was given to Inder by none other than Mr. Shah Rukh Khan... He met inder and said he will call you in a week . At the moment there is no work.this all happened on the set of Zero. Later was even asked to keep in touch with his manger Pooja... she did the same wat garima did.... Can one imagine and believe dat there has not been any work available in these two production houses. Karan johar has said many times he works with stars... well my husband was a star ... still people remember him by his work."

Pallavi further went on to question the Bollywood biggies that why is it so difficult to help the talented and what are they scared of, "Why is it so difficult for these big shots to help talented people. What are they scared of ? Or we can just say they are bad human beings... pretending to be nice. Nepotism should stop... people are dying and these big shots are still not understanding the effect. Government should take strict action against such people."

Late Inder Kumar debuted with Masoon and had a promising career back in 90s. He passed away due to a cardiac arrest back in 2017. 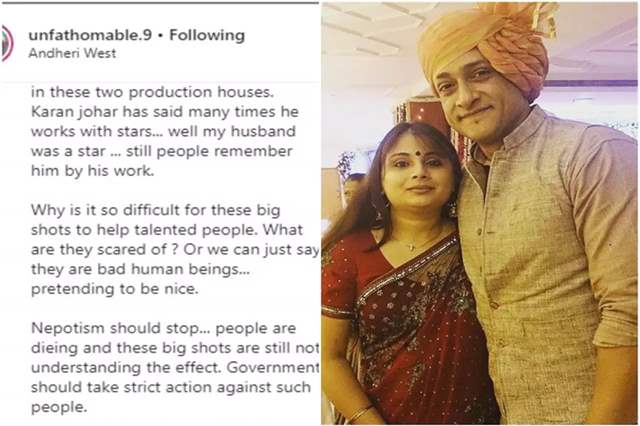 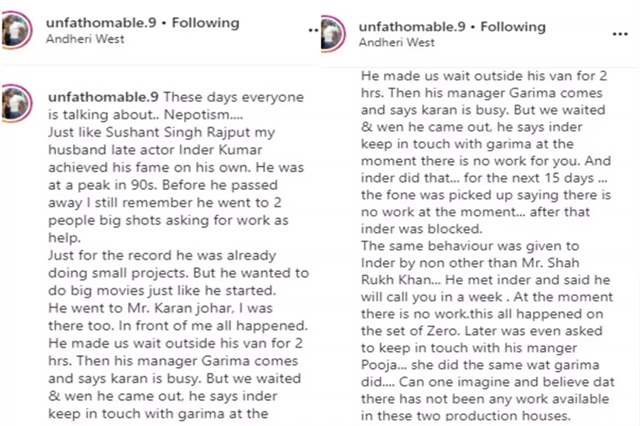 RapChick101 1 months ago I remember, his death was also because of all this outsider treatment Bollywood biggies (mofos) served him with :/

This Independence Day, Dangal TV actors salute our ...
17 minutes ago

Karan Tacker & Saiyami Kher of 'Special Ops' Fame Open Up on ...
45 minutes ago

Shantanu Maheshwari On Bhagat Singh's Efforts Inspired Him ...
47 minutes ago