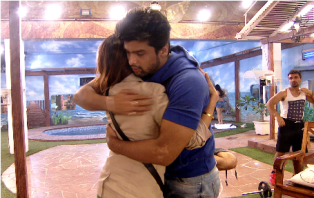 A lot was said about Kushal's uncouth behaviour towards Tanisha before he was unceremoniously asked to leave the Bigg Boss house. During a task, when Kushal Tandon made some personal comments about Tanisha and even dragged her family background into the argument, the whole nation witnessed an uproar which included host Salman Khan.

However, now that Kushal has re-entered the Bigg Boss house, he has made it clear that he is back with the agenda to clear all misunderstandings and repent for his mistakes. He starts by hugging Andy as soon as he enters the house for a fresh start.

Next was Tanisha Mukherjee who had been appalled by Kushal's behaviour and was staunchly against his return. However, Kushal engages in a healthy conversation with her and tells her that he regrets everything that he spoke about her. Tanisha informs him that she was deeply hurt by Kushal's remarks, a lot more than his behavior towards her during the task. Kushal replies back saying that he did take some time to realise his folly but he is genuinely apologetic about his behavior.

He also tells Tanishaa that he wants her to be his friend for a lifetime and he will not let her down anymore whether in the game or outside. Hearing this, Tanishaa accepts Kushal's apology and gives him a tight hug, thus ending the longstanding battle that the two have been fighting since their first week in the Bigg Boss house.

What can we say? Finally, Kushal proves to be a real gentleman...better late than never!

Sree50 7 years ago Tanisha is playing dirty games with every one. The way she behave with Arman very cheap. Shame on her part being a Bollywood celebrity. She swould have been eliminated with Kushal. She was misbehaved with kushal 3 times during the task. Sallu supported her . she is thinking that she is very powerful. The way tanisha behave with Arman that she is desperate to mingle in all aspects of relationship. Shammme!

u r the best always tc