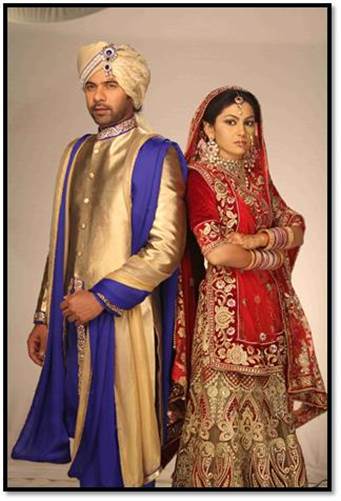 The week 30'14 TAM ratings are out and Zee TV's 9 PM show Kumkum Bhagya, that has seen a distinct spike in viewership ever since its protagonists Pragya and rock star Abhi tied the knot, has further raced up the popularity charts, clocking in 7405 TVTs. While a 4-week average for the pre-wedding period (starting week 21'14 to week 24'14) stood at 3263 TVTs, the show has seen a 127% increase in viewership in the last 6 weeks. With its viewership soaring and the property only moving from strength to strength, Kumkum Bhagya is clearly the biggest fiction show launched in the year so far. With robust properties such as Kumkum Bhagya, Jodha Akbar and Qubool Hai ruling the roost week-on-week, Zee TV is the only channel to have seen a 30% increase in its weekday prime time viewership in the last 6 weeks.

Kumkum Bhagya saw a surge in audience interest during the rather unlikely marriage of its protagonists - the flamboyant rockstar Abhi and the shy, serious girl-next door Pragya. Owing to its engrossing storyline coupled with believable performances, the show has been on a steady ascent, despite stiff competition on its time slot across GEC's. The show premiered on the same slot as the fiction genre leader 'Diya Aur Baati Hum' across Hindi GECs and has managed to grow exponentially. As per TAM,  the show's viewership has dropped by 22% since Week 16'14, when Kumkum Bhagya was launched.

The show was heavily promoted through an aggressive 360 degree marketing campaign by the channel from the launch to the wedding highpoint to ensure traction was growing week on week. Zee TV's approach was one of sustained character building in all its communication across print, on-air and digital media. A judicious mix of mediums including high impact outdoors, print and innovatively crafted, personalized invites shared through social media on the day of the wedding created high visibility for the highpoint. The streamlined promotional strategy not only attracted eyeballs but also garnered a lot of word- of-mouth publicity, thereby creating an enormous pre buzz around the much touted wedding sequence.

Zee TV Business Head Pradeep Hemjadi says, "Kumkum Bhagya, with its gripping narrative and protagonists who have endeared themselves to viewers in a short span of time, has strengthened our position in the 9 PM slot and our performance in weekday primetime has grown by 30% within barely 6 weeks. Our current fiction line-up is robust and is only poised to get stronger with our new launch Jamai Raja - a truly differentiated concept at 8:30 PM on 4th August."

In stark contrast to a view that it is the bahus who are supposed to step in and bring warmth and harmony to a household, Zee TV's latest primetime offering Jamai Raja' breaks the convention and asks - If bahus have done it all along, why can't the jamai? While the son-in-law, without a doubt, is accorded great importance in Indian culture, one rarely, if ever, speaks of his responsibilities towards the wife's side of the family. But, Jamai Raja' begs to differ and has its male protagonist proactively take on the task of setting right the discord between his wife and mother-in-law after marriage and filling their world with love and happiness! With an ensemble cast of Achint Kaur, Ravi Dubey, Apara Mehta and Nia Sharma, the show's promos are currently creating quite a stir and the show looks most promising! Starting 4th August, stay tuned to "Jamai Raja' at 8:30 PM every Monday to Friday on Zee TV.

neetha 6 years ago kumkum bhagya is an awesome show..rocks !

IT UR NEW SHOW IS BEST VOWWW

abhiyaneet8 6 years ago shabbir ahuluwalia and sriti jha are awesme

..PlayfulKiss.. 6 years ago Shabbir Ahluwalia and Sriti Jha are awesome in Kumkum Bhagya.