View Profile
Singh is King - Kumar and King Khan are two names that have been fighting for the number one spot in Bollywood for a long time now, but what we discovered recently was nothing short of amazing.

The news states that the duo is trying very hard to build their friendship and be done with all the hurdles of competition, thrown their way. The matter reached to an extent where both new friends were exchanging expensive gifts. 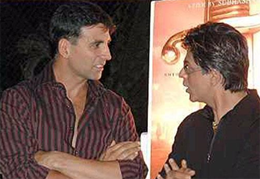 As the buzz reveals, it was Shah Rukh who extended the hand of friendship to Akshay. The friendship started blooming when Shah Rukh sent a flattering text message to Akshay on his performance in Housefull. The actor was highly impressed by Akshay's dramatics in the film. As a mark of his appreciation, SRK also gifted Akshay a very expensive watch. Akshay was so overwhelmed by Shah Rukh's gesture that he decided to gift him a far more expensive watch.

If you think that's all, you're mistaken! The two friends are also taking health tips from each other. In one of his recent interviews, Akshay stated that every time he and Shah Rukh meet, they talk about his back pain and it's cures. It seems like Akshay is very concerned about SRK's health! He went on to say that he and Shah Rukh have discussed hydrotherapy for their respective pains.

Bollywood seems to be a place with tons of relations, but such true and sincere ones are rare to find. Here is wishing both the 'Kings', a very happy dostana together!