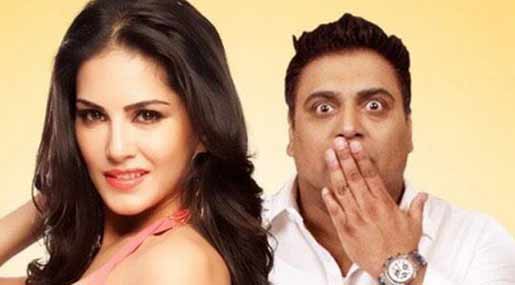 From Ram Kapoor's double-meaning ticklers to seductive stints of actress Sunny Leone, the trailer of comedy caper film "Kuch Kuch Locha Hai" that has been released on Tuesday sees the uncommon pair going wild and dirty.

The trailer of the film shows Ram as a 45-year-old married man, Pravin Patel, who witnesses a "locha" (turmoil) in his life after he gets a chance to meet Bollywood star Shanaya (Sunny), whom he always fantasised about.

The bikini-clad Sunny takes the glamour quotient to another level by showing each and every avatar of her from flaunting red sari to mini skirts.

Delhi boy Navdeep Chhabra, who is making his debut with the film, is playing the role of Ram's musician son, Jiggy who wants to marry his rockstar neighbour Naina (played by Evelyn Sharma).

Meanwhile, Ram can be seen gazing at Sunny who is posing in a yellow bikini in the film's first look that was also unveiled on Tuesday.

"The film is a fun filled laugh riot and I'm sure we will be able to please everybody's sensibilities. Sunny is beautiful and sensuous in the film but apart from this she has showcased comic timing that is going to surprise everybody," film's director Devang Dholakia said in a statement.

"Kuch Kuch Locha Hai" is set to release on May 8.