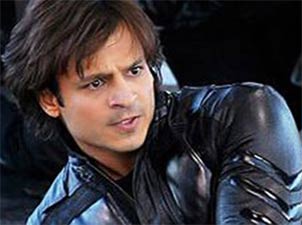 Actor Vivek Oberoi is overwhelmed with the response fetched in by "Krrish 3" and his character of Kaal in the sci-fi superhero film.

Vivek plays super villain Kaal opposite to Hrithik's character of superhero Krrish in the film that has crossed over Rs.100 crore mark within four days of its release.

"I am over the moon now. I am so happy," Vivek told reporters Monday at Chandan theatre here. He was accompanied by Hrithik.

Director-producer Rakesh Roshan's "Krrish 3" is the third instalment of the franchise that began in 2003 with "Koi... Mil Gaya".

Vivek said there are three superheroes in the film.

"There are three superheroes in 'Krrish 3' - one is India's favourite superhero Hrithik Roshan."

"Second and the biggest superhero is his dad (Rakesh Roshan) who nurtured such a big dream... we as Indians have this - 'they are Americans, they can do and Indians can't (make successful sci-fi)'. But he (Rakesh Roshan) has proved to the whole world that Indians can do what the Americans can do. I think it is a great thing that he has done for India, for our pride," said Vivek.

"And the third superhero is our audiences," he added.

Anurag Kashyap Clarifies His Image of 'Consuming Drugs'; ...
19 minutes ago