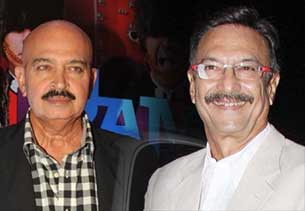 Veteran actor Suresh Oberoi has applauded filmmaker Rakesh Roshan for making a film like "Krrish 3" and also giving his actor-son Vivek a new life and confidence as the villain Kaal.

"This family, the hero and Rakesh Roshan have given Vivek a new life, new confidence, new beginning and I don't think I have seen a better film than this," he added.

"Whatever he (Suresh Oberoi) has said is absolutely true. I saw the film today (Thursday) for the first time and I forgot that I am Kaal. I was enjoying the film like a kid. I was laughing and crying," said Vivek.

"He (Rakesh Roshan) is a legend, a master and with this film he has shown that he is the Steven Spielberg of India," the 37-year-old added.

"Krrish 3" is the third film in the "Krrish" franchise which began with "Koi... Mil Gaya" and stars Hrithik Roshan in the title role.