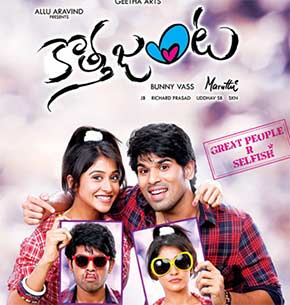 "We thought it would be a nice way to create some buzz for the film. The trailer will be attached with 'Race Gurram'. It was the idea of Sirish's father to attach the trailer with Arjun's film. We are currently getting ready for the audio release on April 12," the film's producer Bunny Vass told IANS.

Directed by Maruthi, "Kotha Janta" also features Regina Cassandra, Madhurima, Rohini and Rao Ramesh in important roles. It is slated to release May 1.

Vass is all praises for Maruthi.

"To direct a hero from megastar Chiranjeevi clan is a challenge, but Maruthi has lived up to the expectation and has presented Sirish in a way the audience would love to see him. It's a role quite contrary to his debut film 'Gouravam'," he said.

Sirish is nephew of actor-politician Chiranjeevi.