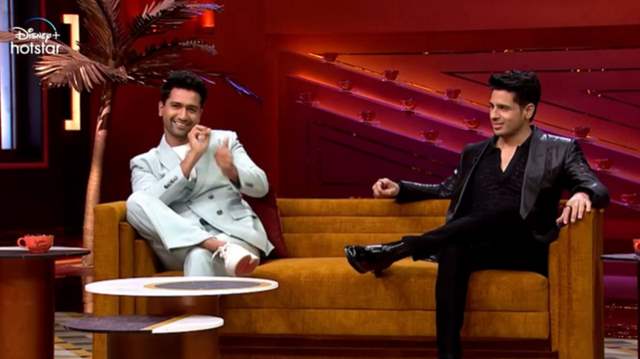 While, we have been witnessing some super fun and frolic episodes of our favourite chat show Koffee With Karan, the promo of the upcoming episode is out and it will surely make you gasp for your breath as the dapper Punjabi Mundas of the town, Vicky Kaushal and Sidharth Malhotra will grace Karan's couch and brew some juicy gossips.

As the trailer begins, Karan Johar introduces the guys as the men of the moment, the conversations around marriages get taken even further as the newly minted groom Vicky Kaushal and accomplished actor and heartthrob Sidharth Malhotra take the couch. The dynamic duo enchants with their charisma, love lives, and manifestations that leave you a little drunk on the Sid-Vicky cocktail!

In a rerun of the “beta shaadi kab karoge?” trauma of eligible bachelors, Vicky Kaushal and Karan Johar gang up on Sidharth Malhotra to make this episode rife with wedding rumours. Faced against the proven power of manifestations coming true on the couch, the star was hard pressed to share a wedding confirmation with his girlfriend, Kiara Advani.

Sharing the clip, Karan wrote, "They're the men of the moment and they're bringing the full Punjabi feels to the Koffee couch! Manifesting a spicy brew this time around😉Watch the seventh episode of #HotstarSpecials #KoffeeWithKaranS7 streaming from 12:00am this Thursday only on Disney+ Hotstar."

Well we don't know if the magical manifestations will work for the dapper Student Of The Year star, but the episode is definitely going to be the one addressing conjectures and speculations.

The episode will stream on Disney Plus Hotstar on this Thursday from 12:00 P.M.