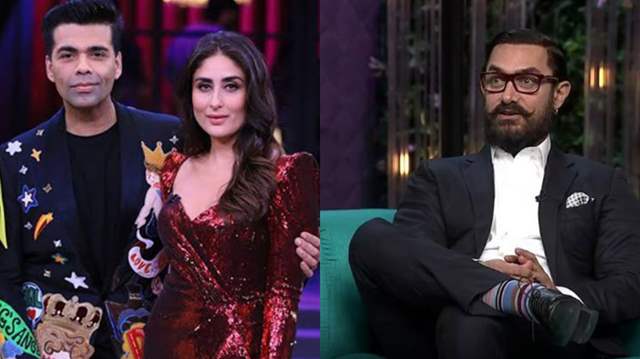 Koffee with Karan season 7 has been the talk of the town since the first episode. Karan Johar's talk show is a perfect blend of secret revealations, juicy gossips and a lot of fun. And now as per recent buzz, Bollywood actors Aamir Khan and Kareena Kapoor Khan will also be seen gracing the couch. The duo will be seen promoting their upcoming movie Laal Singh Chaddha on the popular chat show.

Also hinting at the same earlier today Kareena took to her Instagram account and shared a picture of herself with an intresting caption. She wrote, "I LIKE MY KOFFEE BLACK 🖤"

Now as per a News18 report, Aamir and Karan will be seen discussing the popularity of South Asian films and his film preferences .They both have intriguing opinions about what is wrong with Hindi cinema and the popularity of films from the South. They also talked about Bollywood's future and how OTT has spurred the industry to produce some intriguing material.

It further stated that, Karan will also be quizzing Aamir about his personal life. Karan and Aamir had a long conversation about his friendly ties with Kiran and Reena and how they remain a part of the family. He also spoke about his children Junaid, Ira, and Azad.

Meanwhile, talking about Laal Singh Chaddha, the movie is an official Bollywood adaptation of the Hollywood classic Forrest Gump. The movie is slated to release on August 11 and will witness a box office clash with Akshay Kumar’s Raksha Bandhan.

+ 2
2 months ago Nope. Thanks. I'll rather watch Forrest Gump twice than wasting my time on this horrid, cringy trash.

+ 8
2 months ago how the mighty have fallen. look at all the promos aamir is doing. he might even start accepting awards again!