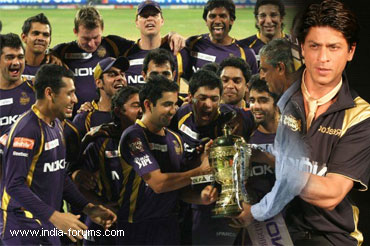 KKR is also co-owned by Juhi Chawla and Jai Mehta.

Actors like Riteish Deshmukh, Arjun Rampal, Shabana Azmi, his closest friend Karan Johar and Kings XI Punjab co-owner Preity Zinta took to Twitter to congratulate the star and his victorius team that won the title Sunday night. Here's what they had to say:

Ritesh Deshmukh: KKR IPL champs - congrats to @iamsrk and Gauri. Had one of the best evenings - rollercoaster emotional ride, ended in a great victory. We celebrated the KKR victory and 'Rowdy Rathore' party together -@iamsrk @akshaykumar at Prabhu Deva's house.

Genelia Dsouza: And KKR are the winners, yayyy! Congrats @iamsrk and the team, you all gave us a super game. Well played CSK.

Shabana Azmi: I know nothing about cricket but I watched the match and prayed really hard for KKR to win! Congrats to the team, SRK and Juhi. Mazaa aa gaya

Farhan Akhtar: The wait is over. Well done KKR. Congratulations @iamsrk and all team owners, members and staff. Let the good times roll.

Kunal Kohli: The most touching moment of the match was when @iamsrk's daughter hugged him all tense and he comforted her.What a sweet moment that was.

Farah Khan (jewellery designer): Loving watching @iamsrk beam from ear to ear. May he always be this happy. Ameen. KKR thumbs up.

Siddharth: Have to say... thoroughly enjoyed Bisla and the greatest all rounder in the modern game,kallis. Party hard Kolkata fans! What an achievement SRK!

Neha Dhupia: A match so worthy of being the final... Well played #csk and a huge congratulations to #kkr and @iamsrk!
49 Likes