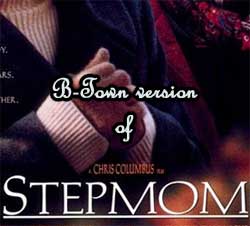 Creativity is simply out the door for Bollywood these days. From big budget projects to low budget projects, Bollywood movies always seems to be "inspired" by Hollywood movies these days. This "inspiration" syndrome has even caught on with renowned director, Karan Johar. Earlier Johar announced that he will be making the B-Town version of Hollywood venture, 'Stepmom'.  In fact, the director has roped in the K3G sisters, Kajol and Kareena, to essay the roles that Susan Sarandon and Julia Roberts played in 'Stepmom'.

Furthermore, news has it that Karan Johar has actually bought the rights for 'Stepmom' to not cause controversy in the near future. 'Stepmom' is about a woman who marries a man with children. She has to deal with the children and her husband's ex-wife who is a big part of the children's lives.
The shooting for the Bollywood version of 'Stepmom' is anticipated to start after KJo is done with 'My Name is Khan.' Buzz also has it that the venture will be directed by Siddharth Malhotra.
Will the Bollywood version of 'Stepmom' prove to be a success? Guess only time will tell!
Featured Video