9X, the flagship Hindi General Entertainment channel of INX Media, is all set to launch a weeknight prime time drama at 10.30 pm. 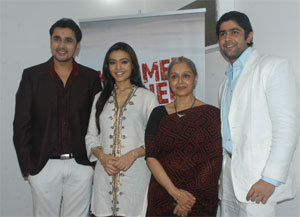 Featured Video
Kissmet Ka Khel is about two engrossing characters locked in a powerful tussle with emotional undercurrents that will make viewers ask: Why has fate made them enemies and not friends? Starting 15th September to air Mondays to Thursdays, at 10.30 pm.

Indrani Mukerjea, Founder & CEO – INX Media, said, "We aim to have our audience identify themselves with the story and aspirations of its young protagonists Krishna and Damini."

Kissmet Ka Khel is the sweeping saga of Krishna and Damini, two strongly motivated protagonists whose aspirations drive them to push all boundaries to realise their dreams. They are two individuals with strong principles who could have been friends, had Fate not decided to make them enemies, thus giving birth to hatred and a war between Krishna and Damini, threatening to destroy not just them but everyone and everything they love.

Krishna is all of seven years old when Fate uproots him from Bihar and brings him to Mumbai, where he has to start his journey to realise his dream. And as this young man grows up, he is driven by but one ambition: to make it big in the construction business in Mumbai, and tower over the city like the skyscrapers he wants to build.

Meanwhile, Damini, who is a rich industrialist's daughter in a quest for the truth, has to struggle against opposition at home and outside, to establish herself as a media baron.

As Krishna and Damini struggle to overcome the obstacles in the way of their goals, their paths cross... they seem to be made for each other...

But Fate has other plans...

+ 8
13 years ago The promo's are catchy. Concept is different from usual shows. Looking forward to the show.

+ 2
13 years ago all new shows of 9x are really good specially ruby,kaun jeethega bollywood ka ticket and ajeeb.
i feel it is is a gr8 show with a nice concept.looking forward to watch it.