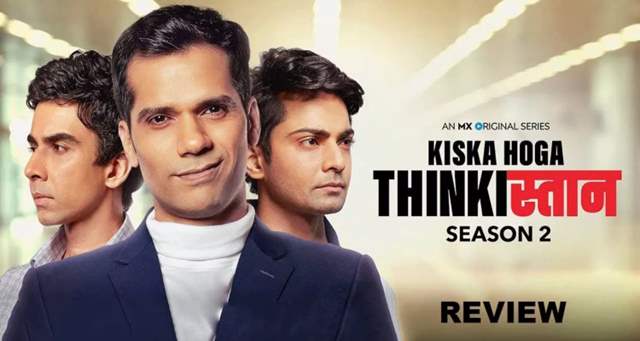 Ever thought of how an ad agency functions? The ups and downs of it? The crazy and unrealistic deadlines along with constant brainstorming sessions? The thirst of proving yourself at every inch in life. This is how the life at MTMC Agency is. With more drama and office rivalry Kiska Hoga Thinkistan lives up to the expectation of the viewers.

William (Neil Bhoopalam) is the new boss of MTMC who steals ideas and pitches ahead without giving credits to his employees. Hema and Amit’s friendship drifts apart because of William who shows favouritism towards Amit rejecting ideas of Hema and who is also a flat-out workplace bully. Playing an antagonist for the first time, Neil Bhoopalam has put his best foot forward and there is no doubt in that. Right from the looks to the way he speaks, Neil ticks all the boxes of being the perfect mean boss of an ad agency.

The 90’s were regarded as a landmark decade for Indian advertising and the characteristic Indianness of the story is what gives it its distinguishing touch. This series portrays the evolution of women from mere employees to women of authorities. It paints a picture of how Indian society has grown since a decade. The series marks the journey of advertising agencies moulding the mindsets of Indians perceiving advertisements.

While the narrative is compelling and the premise, engaging, the best thing about Kiska Hoga Thinkistan Season 2 is its terrific ensemble cast. The shows is bursting at the seams with an eclectic bunch of talented actors, having put in some of their best performances ever in the series. Mandira Bedi is the cream of the crop. She is incandescent and impressive in the role of Anushka, the head of MTMC who runs it with sensitive sagacity.

Hema realises that marriage is not his cup of tea and betrays his wife with his colleague Sneha. Amit on the other hand seems enjoying a meteoric rise in the company and continues to climb the ladder of success but at a cost. It’s hard to imagine any other actors as Hema and Amit. Shravan Reddy and Naveen Kasturia are the heart, soul and spirit of the series. Besides, the aforementioned ones, Kabir Bedi plays a pivotal role in this series. Being the owner of MTMC Agency, he fits the bill of playing Danish. Donning a salt and pepper look of long hair, Kabir Bedi surely makes the look par excellence.

The writing is the star of the show, and delights viewers with its enthralling twists and turns. However the portrayal of work politics and professional drama shown in the series is too harsh but the truth is truth. Attempts are also made to touch upon weighty themes such as sexual harassment, but the series doesn’t pay enough focus on it.

'Get Out' Fame Daniel Kaluuya To Star in Netflix's 'The ...
47 minutes ago

Puja Banerjee on Having a Traditional Wedding After Baby's ...
3 hours ago

"Never Felt Anything After Contracting COVID-19" Says Brian ...
3 hours ago

"I Wanted To Cry Badly But Somehow Held Myself Together" - ...
5 hours ago

Sushant's Family States They Have 'No Faith in Mumbai ...
8 hours ago