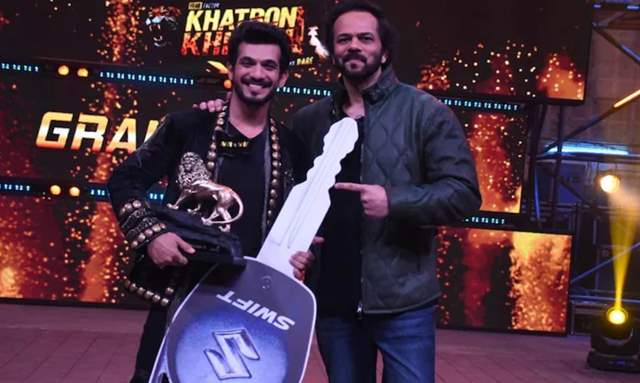 Khatron Ke Khiladi - Darr v/s Dare got its winner yesterday as Arjun Bijlani lifted the trophy. Meanwhile, making it to the top three along with him were Vishal Aditya Singh and Divyanka Tripathi. However, the final battle was between Divyanka and Arjun with the latter taking the trophy for this season of the show home.

After the finale, fans are divided regarding the result, with many believing that Divyanka deserved the trophy more. However, Arjun believes that all three of them are the winners and that we should move on with whatever the result is. Talking to India Forums, he said, ''I know the fans are divided and that has happened in every reality show when there are top two people, some feel the other person is deserving, others feel the person who won is deserving, so that doesn't really matter.''

He added, ''I have already said it and put it myself on social media that me, Vishal and Divyanka were the finalists and when you've reached here after doing 70-80 stunts, it is the journey that matters and I think all three are winners in every sense. Yes, the finale stunt I did win it, it was unfortunate that Divyanka lost the key and show was stuck, but she completed the stunt and she was fab, she swam so well. What really matters now is we move on with our lives with whatever our result is, and as I have already said, all three are winners.''

1 years ago "Fans are divided" - are the fans equally divided? Should say it correctly - fans are divided with majority for divyanka and smaller number for Arjun.. Lol calling it divided is not going hide the reality.And all the talk of "top two contestants" or "the journey" - seems too defensive.. Especially when the two contestants were not equal and in the entire journey one contestant outdid the other.