Ketki Dave and Rasik Dave would be seen toting up a new romantic flavor in Star Plus and Director's Kut popular serial Sapna Babul Ka…Bidaai. Also their on screen characters of being a married couple would be enhanced with a pinch of their real life chemistry. 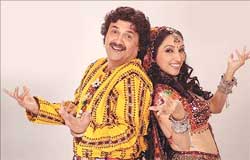 A little birdie informs us that, "Ketki Dave and his real life husband Rasik Dave have been finalized to enact the cameo role of a loving middle aged couple. Their onscreen love and bonding would work as an inspiration for Ragini (Parul Chauhan) and Anmol (Apoorva Agnihotri); this may even lead to reduce the complications between them."

When contacted, Rasik Dave confirmed the news saying, "Yes, Ketki and I will be entering Bidaai; but I don't know much about the character, as it was Ketki who pitched me for the role."

When buzzed, Ketki Dave in a tone of acceptance said, "Yes we are enacting the role of a couple who are deeply in love, even after years of being married."

On probing to expatriate the reason for accepting this role she asserted, "I have always preferred to enact different roles on TV and secondly I loved the character I was offered. Also it gives me great pleasure working with a producer like Rajan Shahi."

When asked, Ketki Dave to highlight the reason for the sudden invisibility of her role of Neema Fai in Star Plus serial Behenein she replied, "Due to some sudden change in the on-going track my role had to take an abrupt exit from the show. Though I haven't got any official consent from the creatives, I haven't been shooting for the same since a month. But if called back I wouldn't mind getting back to the serial."

The duo would start shooting for Bidaai today, and their entry sequence is expected to take place in the coming week.

10 years ago Anmol and Ragini are so hot. :D
But Sadhna and Aalekh were better :'(

+ 3
10 years ago Wow thats great I hope they play cupid in getting Anmol and ragini together !!!
Anmol and Ragini are beautiful together !!! They make an awesome pair !!!

10 years ago thanks, shall look forward to this track, I love Bidaai,my fav show

10 years ago well, people are comparing Ekta and Rajan,

Ekta: Kills Tulsi and brings her back, Kills Mihir and brings him back. as if audience was dumb. and you all are appreciating that, ok

Rajan: Read "actors didn't wanted to play elder character" hence, they get killed in the show, it is not in his hand to bring Kinsuk and Sara Back and after their death they shouldn't be back not even with new actors as Ekta used to do.

well and "18th century story", my friend if you were in that century, you won't be able to re-marry and start your family again, in that century woman was to walk in white sari clad all the time. this show has shown todays realistic approach, a widow is allowed to re-marry, and soon Angad will also get to re-marry, why not?

i am glad at least this show isn't taken in to some village and shown girls getting married at small age and after their marriage suffering.

mahajan_09 10 years ago Stay away from ragini apurva uncle,she is of only ranvir's
kinny come backkkkkkkkkkkkkkk

10 years ago we don't want 2 know anything, we just want Kinshuk and Sara back in Bidai.
Kinshuk oppersite Parul and Sara oppersite Angad.