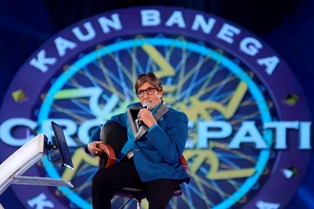 The much celebrated Hot Seat of the most anticipated game show Kaun Banega Crorepati, has been moved out of the four walls of the iconic KBC sets, for the first time ever, to land in the city of Surat! Amidst thousands of adoring fans, superstar of the millennium Mr. Amitabh Bachchan opened the new season in his inimitable style. This grand extravaganza will launch the new season of KBC on August 17, 2014 at 8:30 pm only on Sony Entertainment Television. Produced by Big Synergy Media Ltd, the new season of KBC will then air regularly every Monday to Thursdayat 8:30 pm.

The legendary host Mr. Bachchan along with a bevy of dancers kept the audience captivated with a never-seen- before performance where he grooved to songs sung especially by him for KBC. Amidst enthralling the audience with this act, he had ladies in the audience swooning when he romanced them with his charm. Comedy King Kapil Sharma, the host for the evening left the audience in splits with his impeccable comic timing. He also sat on the Hot Seat for the first time and underwent the tension that contestants undergo and had his own hilarious takes on that.

Adding to the excitement were the iconic cops Dayanand Shetty (Daya) and Aditya Srivasatava (Abhijeet) from CID, Sony's landmark and record breaking show who interacted with the audience. Then the valiant warrior and Rajput hero, Maharana Pratap a.k.a Faisal Khan left the audience spellbound with a stellar dance performance. The trio of Neeti Mohan, Meiyang Chang and Aniruddh Dave also added to the entertainment quotient of the evening keeping the audience engaged in a musical banter. The charming Shillong Choir gave a heart- warming performance. 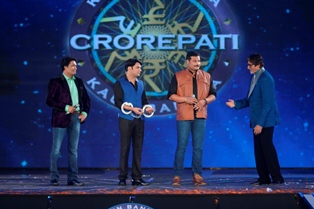 Adding to that Mr. Nachiket Pantvaidya, Sr. Executive Vice-President & Business Head, SET said, "Kaun Banega Crorepati over the years has developed a legacy of inspiring people to achieve their dreams. We are taking this show to our audience to let them experience the grandeur of this show live and first hand. Seeing Mr. Bachchan performing live will be a once in a lifetime opportunity for thousands of people. We hope that KBC continues to enthrall and inspire our viewers with positivity and hope."

Speaking on the occasion, Mr. Siddhartha Basu, CMD, Big Synergy Media Ltd. said, "The Grand Premiere of India's biggest open show is about reaching out to people where they are, allowing an opportunity for an exciting close encounter with the KBC experience. For the viewers, it promises a celebratory mega spectacle of a much loved show, as a curtain raiser to the new season of KBC, which seeks to engage minds and hearts alike."

KBC has always celebrated the unique diversity of India and its people, their individual views and beliefs, and over the years showcasing this diversity has helped in being inclusive'. This inclusivity is what this year's campaign celebrates. The core message of this season's campaign strengthens this proposition with the thought 'Yahan Sirf Paise Nahi, Dil Bhi Jeete Jate Hain'.

There have been significant changes in the lifelines to make the game more interesting. The expert advice lifeline has been converted to a panel of three wise men are seated amongst the audience called 'Triguni'. Upon being called, these 3 wise men will give the correct answer along with interesting trivia around the question. Another interesting lifeline called 'Code Red' is when the family of the participants can intimate the contestants on when they feel they should quit, by pressing a buzzer placed in front of them.

6 years ago v excited to c our dear Duo with Mr. Bachchan & kapil sharma.
KBC has always been one of my fav show,so eagerly waiting 4 d new season.

6 years ago Waiting for your performance Adi sir.. you are superb sir...

6 years ago Faisal Khan am so excited to see your performance .

Faisal Khan am so excited to see your performance .

6 years ago Cant wait for KBC premiere as faisal khan is going to perform after long time cant wait.

6 years ago Faisal Khan all the best for the act

Love you so much